Los Angeles Dodgers manager Don Mattingly is making a bid to close out the Atlanta Braves before the home folks in Game 4 of the National League Division Series Monday night, shifting to Clayton Kershaw as his pitcher. But if the Dodgers can get it done, they shouldn't celebrate too much. 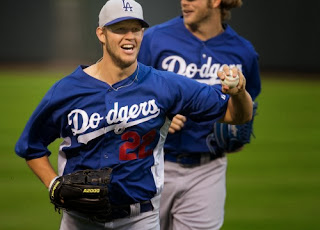 The Dodgers are setting the table for a big night at Dodger Stadium Monday, calling on Clayton Kershaw as their starting pitcher in Game 4 (Keith Allison/Creative Commons Attribution-Share Alike 2.0 Generic license).

A sports writer's memory is filled with remarkable events. As the Los Angeles Dodgers close in on winning their National League Division Series (NLDS) against the Atlanta Braves, a memory from 1995 presents itself.

The Cincinnati Reds had just defeated the Dodgers in the NLDS, marking the first year of expanded playoffs. Reds players celebrated, whooping, popping bottles and pouring stuff all over each other, really letting loose in their clubhouse.

The Reds owner, the late Marge Schott, often is vilified for certain badly aimed remarks. But as she surveyed the scene around the Riverfront Stadium while players and fans savored the victory, a moment of brilliance flashed before her and she asked, "What did I win?"

Answer: Nothing. The Reds went on to lose the National League Division Series (NLDS) to the Atlanta Braves in four games.

The Dodgers might end up celebrating Monday night at Dodger Stadium, where they hold a 2-1 lead in their NLDS with the Braves heading into Game 4. Dodgers manager Don Mattingly is trying to make sure of it, making a last-second announcement Monday afternoon that his man on the hill will be the best there is, left-hander Clayton Kershaw. All along, the plan has been right-hander Ricky Nolasco for Game 4. But Nolasco has allowed 17 runs in his last three starts, and Kershaw fanned 12 Braves in a 6-1 Game 1 victory.

The move comes with some risk, though not much. Kershaw hasn't pitched with three days of rest all season. There is no guarantee that it will work. But this guy is such a tough nut and such an old soul, and this moment has enough largeness to bring it out of him. And even if it fails, the Dodgers will bring back Zack Greinke in Atlanta for Game 5. Is Greinke large enough for that moment? The Dodgers will hope they don't have to find out.

Dodger Stadium is the "Magic Castle" again this season. There seems to be some controversy as to when that name was coined. No one disputes that it belongs to the great Dodgers broadcaster, Vin Scully. But some accounts say it goes back to 1973, when that great crop led by Davey Lopes, Ron Cey and Steve Garvey first became contenders, and others pin it to 1988, when the Dodgers last won the World Series.

It's not exactly World Series or bust this year for the Dodgers, but they also can't possibly be satisfied with winning an NLDS against an opponent that half-armed itself. It's true that the Dodgers already have made remarkable progress this year under new ownership that has dedicated itself to bringing back the Magic Castle. But winning this NLDS wouldn't take them any further.

This team is feeling it right now. Sunday night, they hammered out 14 hits in a 13-6 win against the Braves to take a 2-1 lead in the best-of-three series. The Dodgers put 18 runners on base and left only five, going seven-for-15 with runners in scoring position. Their starting pitcher, Hyun-jin Ryu, produced a terrible night, and their batters took it out on the Atlanta starter, Julio Teheran.

Hanley Ramirez, the first shot in the new ownership's player procurement salvo last summer, has six hits in the series, tied for the most ever by a player in the NLDS. But everyone around Ramirez is hitting, too, or at least reaching base. And this moment is right for the Dodgers.

The Braves will attempt to stay alive behind right-hander Freddy Garcia, who has started three games for the Braves since they acquired him from the Baltimore Orioles on Aug. 23, and all three have been quality. But two of those lineups were the Miami Marlins and the Milwaukee Brewers. The other was the Washington Nationals. None of those lineups can fire like the Dodgers.

In a worst case scenario for the Dodgers, they lose Game 4 and go to Atlanta with Greinke in Game 5. Which is to say that the Dodgers simultaneously face a can't lose situation and a no-win situation. The Dodgers surely can't lose the series at this point. If they do, the Dodgers and their fans will be more than disappointed. And even if they win, it shouldn't be that big of a deal. They will not have won anything.

That's life at the top. It's where the Dodgers want to be.