The Detroit Tigers entered their American League Division Series against the Oakland Athletics with one of the game's most crushing lineups. But the Tigers hitters instead are being crushed by Oakland pitchers. Following another day of goose eggs on the scoreboard, the Tigers face elimination Tuesday. 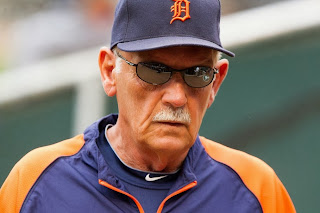 Detroit Tigers manager Jim Leyland is under some heat for his use of pitchers against the Oakland Athletics. But his hitters aren't helping him (Keith Allison/Creative Commons Attribution-Share Alike 2.0 Generic license).

Top of the first inning, Game 1 of the American League Division Series (ALDS) between the Detroit Tigers and the Oakland Athletics in Oakland, and five of the first six Tigers reach base, resulting in a 3-0 lead.

In 26 innings of at-bats since then, the Tigers have matched that. Three runs, all of them in the same inning. They lost Game 2, 1-0, then took it home to Comerica Park Monday and lost, 6-3. Now, the Tigers are down, 2-1, in the ALDS, and this team that advanced to the league finals in 2011 and the World Series in 2012, then won the American League Central division title without serious challenge in 2013, this team with the best pedigree of any AL playoff team in the last three years, this team suddenly faces elimination on its home field Tuesday.

Detroit's poor offense is making everyone look bad. For example, Tigers manager Jim Leyland is under a bit of scrutiny for choosing Al Alburquerque to begin the ninth inning of Game 2. Alburquerque gave up a run before any Oakland hitter made a ninth-inning out, which was enough to give the A's a 1-0 win.

Commentators are wondering why Leyland didn't use his closer, Joaquin Benoit. Of course, the book tells you why he didn't. In a tie game at home going to the ninth inning, the closer is in there, no question. If the closer throws a shutout ninth and the hitters score in the bottom of the inning, the game is won and the closer worked only the one inning.

But the Tigers didn't score at all in Game 2, and that tied their manager's hands. It does seem wrong to blame it on Leyland when his hitters managed only four hits and struck out nine times in eight innings against -- Sonny Gray? Ever heard of him? Gray was the 18th overall pick in 2011, out of Vanderbilt. The A's brought him up this season and he went 5-3 with a 2.67 ERA in 12 starts.

Gray was right there with Detroit's Justin Verlander, who didn't have his typical year (13-12, 3.46). But Verlander showed up for this one, allowing four hits and striking out 11 in seven shutout innings.

The Tigers finally hit a little in Game 3, scoring three times in the fourth and tying the game at 3-3. Here, now, Leyland might be second guessed. His starting pitcher, Anibal Sanchez, already wasn't very good in this one. It's often a pretty lame second guess to hammer the manager for leaving his starter in for too long. But in a playoff game with a deep bullpen, built-in days off and a starter who has allowed runs in the last two innings, it's a pretty easy first guess.

Leyland missed it. He rolled Sanchez out there for the fifth inning, and the A's rolled him quickly. Oakland's Brandon Moss homered with one out, then Yoenis Cespedes singled, then Seth Smith homered. All the air had to come out of Comerica Park as the Tigers fell to a 6-3 deficit right after battling back to tie the game.

So, the Tigers are in very deep trouble now, and it could end for them very soon. Game 4 comes up Tuesday in Detroit. The Tigers will go with right-hander Doug Fister, who didn't win in last year's postseason even though he allowed only three runs in 19 1/3 innings.

The Tigers aren't hitting any better right now. And it might not get better, because Oakland's starter Dan Straily, a right-hander, led all AL rookies in wins with 10 and strikeouts with 124.

We might not be seeing the Tigers for long.