Almost no one believed the Boston Red Sox were about to win the World Series when the 2013 baseball season began. Everyone else in the American League East appeared to be better. Just shows, once more, how easily we can be tricked by names and fame. 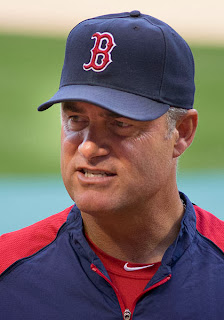 The winter is here, so it's time to scour the list of free agent players to determine the best new fits for one's team, and to investigate the trade market for deals.

Most of all, in some quarters, it's time to make a splash, to make headlines, to energize the fans and create a buzz for 2014.

However, as the Boston Red Sox showed us in 2013, building a champion isn't the same thing as lighting up the news ether. Come to think of it, the Los Angeles Angels of the last two years have made the same point.

When it's about building a champion, tiny, incremental approaches work just as well loading up star power, if not better. Improving your club by inches instead of miles works. Addition by subtraction works. Building for depth, rather than star power, works.

It also helps to have key players bounce back from injuries and poor seasons. It helps to install a field manager who might not be a big star or a big personality, but who understands that the players are the team.

It also helps to have players rising to the moment. And one of the greatest postseason hitters in the game's history.

On Aug. 25, 2012, the Red Sox made a blockbuster deal with the Los Angeles Dodgers, clearing away about $275 in outstanding salaries and receiving almost nothing in return. On their way to a last-place finish, the Red Sox dealt away real big league talent like Adrian Gonzalez and Carl Crawford, who were good players for the Dodgers in 2013, and a solid bench player in Nick Punto. They dealt away pitcher Josh Beckett, who has seen some high points in his big league career.

As we baseball initiates digested the trade, all we could think was that the Dodgers, under their new ownership, were boldly building a pennant winner, while the Red Sox consigned themselves to a long haul of building themselves from the very bottom of the tough American League East to the top.

So, we had that wrong.

The Dodgers did, in fact, markedly improve their team. It didn't show up in the balance of the 2012 season, nor did it appear for the majority of 2013. However, the Dodgers put together that incredible 42-8 run, the best extended period for any team in more than 70 years, and won the National League West easily. Then, they won a round of playoffs against the Atlanta Braves before falling to the St. Louis Cardinals in the National League Championship Series.

Their new manager, John Farrell, is quite a bit less bombastic than his predecessor, Bobby Valentine, which had to even out the moods in that clubhouse. A pitcher, John Lackey, who had been counted by Red Sox fans among their most disappointing acquisitions, produced a nice year and helped solidify the starting rotation.

They improved their team by inches, rather than miles, bringing in players like David Ross, Jonny Gomes, Mike Napoli, Shane Victorino, Koji Uehara, Stephen Drew and Mike Carp. The total combined payroll cost for all of those players in 2013 came to about $30 million.

The Red Sox began 2012 with a payroll of $173 million, with hundreds of millions more in guaranteed future salaries. The reduced their payroll to $150 million in 2013, while dramatically reducing their future salary exposure. They improved by 28 wins, from 69 in 2012 to 97 in 2013. Addition by subtraction.

The signing of Uehara proved to be especially helpful. The Red Sox had hoped Joel Hanrahan, acquired by trade from the Pittsburgh Pirates, would be their closer. That failing, perhaps Andrew Bailey, acquired a year earlier from the Oakland Athletics, would be that man. But both were hurt and neither could close. It fell to Uehara, who was nearly unhittable (33 hits in 74 1/3 innings, 0.565 WHIP). They built for depth.

Mostly, though, it was about David Ortiz, who lasted only 90 games in 2012 due to an injury to his right Achilles tendon. Ortiz was all the way back in 2013, and the lineup the Red Sox built around him was relentless. And that's largely due to the full return of leadoff hitter Jacoby Ellsbury, who missed two months of the 2012 season with a shoulder injury.

In the middle of all that was the clean-up hitter, that powerhouse, Ortiz, who produced a .395 on-base percentage, a .564 slugging percentage and an OPS-plus of 160, fourth in the American League.

During the postseason, Ortiz produced not just big numbers, but key hits at critical junctures. Best of all was the grand slam in Game 2 of the American League Championship Series, tying that game in the eighth inning after the Detroit Tigers had taken a 5-1 lead and threatened to go up in games, 2-0, at Fenway Park.

After beating the Tampa Bay Rays in a four-game American League Divisional Series, the Red Sox beat the Tigers in a six-game ALCS, then defeated the St. Louis Cardinals in a six-game World Series.

Sometimes, the best addition is a player you had all along. That, too, is worth remembering as we crank up the hot stove for another winter.