Here we go: Let's get acquainted with the 2014 season 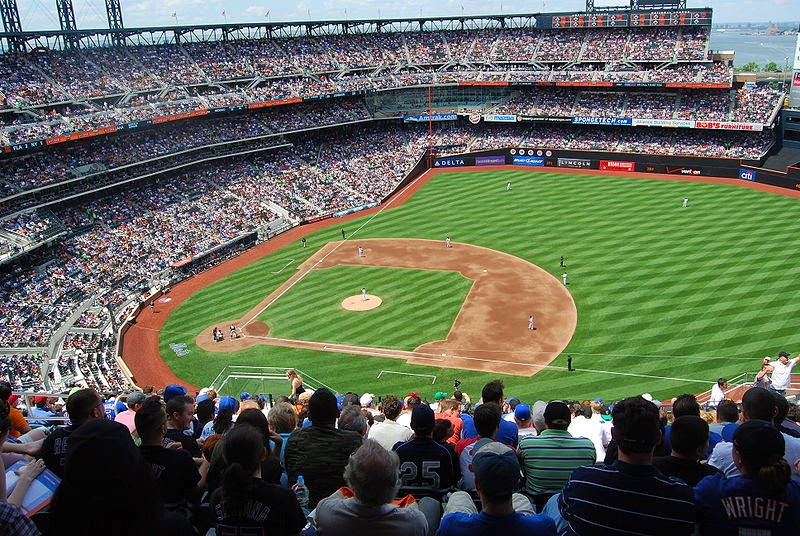 Ahhh ... This is Citi Field, home of the New York Mets, but any ball yard will do (public domain image).

In the spirit of becoming acquainted with the 2014 baseball season, everyone encounters the same questions as to predicting the outcome.

Which team is the best team now that the offseason trades and free-agent signings have taken place? The team with the most productive major league talent.

How do we decide which team has the most productive major league talent? The most direct approach would be to assign each player a value based on his productivity. Then, add together the values (players) on each team and see which teams have the most total player value.

Can we do that? Don't know. But many people following the game are enamored of Wins Above Replacement (WAR) as one number that does it all, combining a player's various contributions into a value, which, itself, signals other values. In the last few years, as WAR has gained curiosity and acceptance from fans and the media, the statistic has spun off a little universe of its own, an alternate universe that overwhelms our old ways of valuing players.

However, every team has a ready stock of "replacement players," athletes who compete well at the Class AAA level, but don't have enough to prosper in the Major Leagues. It's the classic "4A" player who would be one of the least able players in the big leagues and one of the most able players in Class AAA.

Baseball-reference.com sets its version of WAR so a team composed entirely of replacement players would win 48 games in a season (a replacement player's WAR, of course, is 0.0). That's a final regular season record of 48-114, which is designed to match the team's Pythagorean. No team since at least 1960 actually has had such a low Pythagorean.

Big question: In what sense is it feasible to assign a win to a player? In truth, it's rather impossible. It's hard enough assigning runs to a player, which is the first step. But we much better understand the relationship between players and runs. A single and a double is a run. A home run is a run. A triple and a sacrifice fly is a run. A 6-4-3 double play with no one out and the bases loaded is a run. But keeping the other team from scoring with a great catch, a strong throw or a strikeout, those are runs, too. All of these runs are the outcomes of events that occur in some sequence. By taking probabilistic measurements of how a player would sequence through a game, researchers have spent decades working out how a player's contributions add up in runs.

From there, a principle is invoked, more or less evenly: 10 runs is a win. Every ten runs that can be accounted to a player after all of our calculations give that player credit for a win. It's not obvious how 10 runs should equal a win, but it falls out from assumptions. Baseball-reference.com sets the total WAR across the Major Leagues at 1,000. If the total number of these statistically defined "runs above replacement" is assigned as 10,000, that would give us 10 runs per win above replacement. In fact, 22,105 runs were scored last season in the Major Leagues. If we're playing along with WAR, we surmise 12,105 of those runs are replacement level runs. Somehow, then, as reason suggests, all the little events of the big league games in 2013 – all the homers, strikeouts, caught stealings, double plays, outfield assists, bases on balls, etc. – must be calibrated to come to 22,105 runs and 10,000 runs above replacement level.

The stipulation of 1,000 WAR also comes to 33.33 per team. As a team of all replacement players would win 48 games, a team with that plus the average WAR value per team wins 81 games, half of its schedule. Your break-even team should be 33 WAR, right in the middle of the league.

Michael Cuddyer won the National League batting title in 2013, .331 for the Colorado Rockies. Not so long ago, that would have credited Cuddyer as a productive hitter. But WAR says Cuddyer is barely productive enough to hold his place as an everyday player in the major leagues. Baseball-reference.com puts Cuddyer's WAR in 2013 at 2.0. By the baseball-reference.com reckoning, a player producing less than 2.0 is producing at the level of a reserve player, with players at that level or higher passing as legitimate everyday players in the major leagues. A player reaching a 5.0 WAR is said to be playing at an All-Star level in his league, and a player reaching 8.0 is having an MVP season.

The task here is to figure out which teams have which players who have some intensity of WAR value. Knowing the answers is, at least, a starting point going to 2014.

In essence, the top 240 position players and the top 240 pitchers by baseball-reference.com WAR in 2013 have been identified and placed on their 2014 clubs after the offseason transactions and up to this moment of writing. These are the core most productive players in the game for 2013.

If talent were distributed evenly, each club would have eight players from each group. It's enough players to account for the real value across baseball, even if the value isn't distributed evenly. We could have considered more players, but the remaining lot have little, no or negative value. Including them won't revise any team's projections substantially upwards, and the players in this batch don't stand to be around much this year. But those who break through could change pennant races.

Bowing to idiosyncrasy, one other subdivision has been made within the group of position players, and a corresponding subdivision is made within the pitchers. It has long here been believed that a team in the top half at every position, even if that team ranks 15th out of 30 across the board, is a strong baseball team, perhaps likely to be over-powered deep in the playoffs, but a strong playoff entrant that will have no weaknesses and will be able to exploit the weaknesses of other teams. Again, this team will be devoured playing this game most of the time against clubs with more compelling strengths.

But for the purposes of navigating the regular season with enough goods to plow through the lesser lights and into the playoffs, that team is right on the target, a borderline playoff team that can go deep because it does not beat itself. That team can upgrade at some position if it wishes, but the team in place already is solid.

It's remarkable how few clubs actually meet this standard, which doesn't seem so demanding. Just don't have any position where you're worse than 15th. Yet, only one club comes close.

Looking at which teams have the most 2013 WAR concentrated in which players, a surprising finding has it that no club has more players than the Oakland Athletics, perennially one of the lowest spenders in the game. Somehow, Billy Beane's best and brightest have accumulated half-and-again their fair share of high WAR value players.

However, the A's do not possess the most total WAR value among those players. That distinction belongs to the St. Louis Cardinals, who have 50.3 WAR among the 21 players they’ve placed on the lists.

Going through each club's Opening Day roster, we've added up who has the most WAR and who doesn't, division by division. The results might be predictive about 2014, though it's better thought of as how 2013 would have turned out if all the players were on their 2014 teams in 2013.

For each team we list four categories of players. The first is position players who finished in the top 15 at their positions by WAR in 2013. First, the position is given, followed the players name, his WAR ranking at his position in 2013, then his 2013 WAR.

The next two categories are pitchers. The first is intended to more or less match the first category of position players, except we just give the top 120 by 2013 WAR. The second category of pitchers is the second 120 by 2013 WAR. In each case, we give the pitchers name, his 2013 WAR ranking among pitchers, then his 2013 WAR. Again, given 30 Major League teams, the average club would have four players in each of the four categories, totaling eight position players and eight pitchers.

The lists actually come to slightly more than 240 position players and 240 pitchers due to ties at 240th place on each side. All players in those ties are included.

It's close enough for jazz to think of the top-half position players and the top 120 pitchers as "good" players. If your team has these guys, you don't need to upgrade. The remaining level of position players and the remaining level of pitchers might be thought of as "average" players, compared with the "replacement" players on which WAR is based. Again, these average players are valuable, although you definitely want to upgrade a position if you have one of these players holding it down.

Players not listed might be thought of as replacement players, more or less. The lists cut off at 0.7 WAR for position players and 0.6 WAR for pitchers, so there's still value above replacement not listed, though not much.

So, consider the Cardinals, who, as mentioned, have 21 players on the lists totaling 50.3 WAR. If we add 50.3 to the 48 wins for a replacement-level team, that would come to 98 wins. However, there remain four roster spots and many more players in that “little, no or negative WAR value” category not here included, so we wouldn’t actually expect the Cardinals to win 98 based on this. More likely, the Cardinals would come in around 90-95 wins after accounting for the lesser lights.

All right, here we go, division by division: