Now that fifth best in some league is good enough to reach the playoffs, even the worse clubs know they're only one or two good players and a dozen good bounces from surviving to October. Thus the distance from the middle of the league to the bottom is shorter than ever. 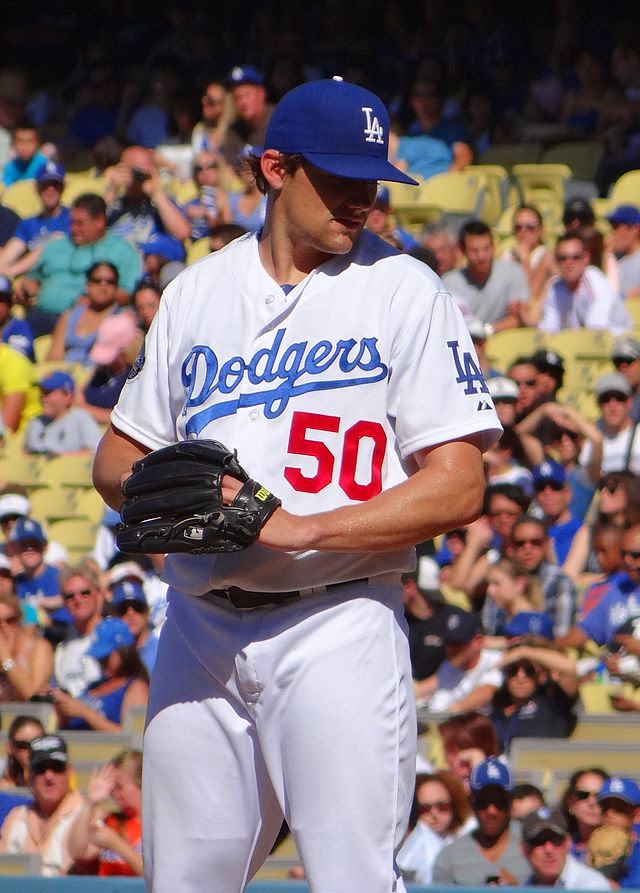 Nathan Eovaldi, traded by the Dodgers to the Miami Marlins for Hanley Ramirez, now is helping the Marlins into the National League playoff race (Cbl62 at en.wikipedia/Creative Commons Attribution ShareAlike Unported 3.0 license).

The two weeks between the quarter pole and the one-third mark changed the face of the baseball season, or at least brought it into focus.

The divisional races already were looking weak. Three weeks ago, though, the leads in two divisions were one-half game and the leads were within four games in three others. But as of June 2, every division leader had at least a three-game advantage.

Some of us are old coots who remember a day before divisions, and a year like this makes us half-relish those days. In the American League, we would have a smoking race right now between the Athletics, Toronto Blue Jays and Detroit Tigers, all within two games of the top. In that past world, nine clubs would be within 6 1/2 games of first place.

Then again, the National League would be a dreary snooze, with the San Francisco Giants three games ahead of the Milwaukee Brewers, 5 1/2 ahead of the Braves and seven ahead of the St. Louis Cardinals.

So, we take what we have now, universal wild card races in which a scrum of mediocre teams is playing for something, which is better than playing for nothing, but not much better. It's one game in the playoffs. It's enough to give most clubs a feint whiff of a chance, but it's not enough to make fans of shadowy contenders forget that they hate their local ownership.

One hates to annoint the division leaders, but no one else is playing so well that it's clear how any of the present leaders would fall. The races in the NL East and AL West looked further apart than ever after Memorial Day. The Giants were 7 1/2 games ahead of the second-place Dodgers in the NL West. The Detroit Tigers are the dominant club in the AL Central and they stoll held a 4 1/2-game lead after losing 10 of their last 14.

The St. Louis Cardinals have enough pedigree to claim that they might make up their four-game deficit to the Milwaukee Brewers in the NL Central, and the Toronto Blue Jays don't have enough pedigree to assume they will stay in the AL East lead, so there is that little bit of suspense at the top. But most of the puzzles are in the middle of each league, where the solutions don't stand to be gratifying.

On the morning of June 2, when every team had now played one-third (54) of its games or more, the two National League wild cards were the Dodgers and Cardinals, last year's contestants in the National League Championship Series. Under the present scenario, it would be a one-game playoff, which doesn't bode well for the Dodgers, the way the Cardinals have fared against Clayton Kershaw. The Cardinals beat Kershaw in all three of his starts against them last year.

The Pirates and Cincinnati Reds both were within 2 1/2 games of the second wild card, but that's a long distance considering the faltering states of their bullpens and the number of teams in between. The Diamondbacks and Chicago Cubs were unable to make a move between the one-third mark and the quarter pole, so they remained at the bottom of the standings. It would appear they will be joined by the Phillies and San Diego Padres, who both lost traction in May while the Pirates and Reds gained traction.

The Angels lost traction in the AL west by losing three straight at Oakland, but they oddly remained in the first wild card because the fifth-place team, the New York Yankees, lost two of three at home against the Minnesota Twins. The rubber game had to hurt – Phil Hughes held the Yankees to two runs in eight innings of a 7-2 victory, raising his record to 6-1 and lowering his ERA to 3.12. Hughes did good work with the Yankees, but he botched his walk year in 2013 and fell to the Twins in free agency for three years at $24 million.

The Angels might have made a bid for Hughes, who went to high school in Santa Ana, but they're still holding the top wild card spot despite jitters in their pitching staff. If the Angels could straighten out their bullpen, they'd have a good game going, because they're top-half of the AL everywhere else except third base. The Angels have gotten nothing from their major off-season acquisitions – Hector Santiago, David Freese, Joe Smith, Fernando Salas, Raul Ibanez – except that Tyler Skaggs has been a solid fifth starter. Their combined WAR was minus-0.6. Yet, the Angels are a much better team.

The Yankees are spending $197 million on the most mediocre team that money can buy. It probably isn't true that you can just go out and buy a championship, but you can certainly go out and just buy a mediocre team, and that's enough for fifth place. The Yankees have attended wild-card playoffs more than any other club. They've only missed twice, and the first of those (2008), they would have been the second wild card. Last year was the first time the Yankees fell out, but they didn't fall out until September.

Last year might be counted as a freak occurence, though this season says different. The Yankees added breadth to the offense by letting go of Robinson Cano and signing three bats on the free-agent market, but everyone is scuffling except for Mark Teixeira Yangervis Solarte, the replacement at third base for Alex Rodriguez. The Yankees were only 11th in AL runs scored and the team was really living off a pitching staff ranked seventh in AL ERA (4.02).

Presumably, the Yankees were vulnerable at 29-27. Definitely, the Yankees are ordinary, which is fifth place. The Baltimore Orioles, Seattle Mariners and Texas Rangers were only one-half game behind them, while the Boston Red Sox, Chicago White Sox, Cleveland Indians and Kansas City Royals all were within 2 1/2 games or less. That's your AL wild card division. The Twins and Tampa Bay Rays appear to have fallen out, and the Houston Astros have never been in.

But the Astros are showing long-awaited signs of progress and have become, quite out of nowhere, a very competitive team. Last year, the Astros were competitive with poor teams -- 33-35 against teams that finished below .500. But they didn't belong on the field against better clubs -- a deep-bottom 18-76 against clubs finishing .500 or better. The next worst AL club in that regard, the Twins, were 33-71.

Through two days of June, The Astros were 19-28 against clubs .500 or better, which isn't great, but it already exceeds last year's win total, and it does give them more wins against winners than any other club except the Giants (21-11). The Astros had faced the better clubs 47 times, more games than any other Major League club, with the Red Sox coming in next at 39 (18-21).

The Astros may yet climb the steep hill to mediocrity and make themselves playoff contenders among this bunch. Following their series this week against the Angels, the Astros embark on nine games against the most of badly faltering clubs out there – the Twins, the Diamondbacks and the Rays. After two at Washington, they go to St. Petersburg for four.  They won't face a contemporary powerhouse for two weeks. Last year, the Astros broke even against these clubs. If they can win nine or 10 of these 15, they'll pick up a couple of games on the fifth-place scrum and place themselves on the outer fringe of the race.

It is, after all, a race to the middle for that coveted position that tells the world you're fifth best. May the most mediocre team prevail.