No one has questioned Mike Trout's greatness in his first two years with the Angels, but that never got him an MVP award. This season, the way he's going right now, there might not be any stopping him. The Angels are winning, and Trout is a key reason. 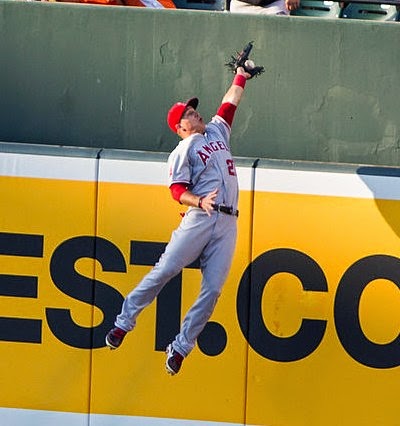 Arguments have raged for the last couple of years as to whether Mike Trout was or was not the best baseball player in the world. The arguments against him boiled down to this: Miguel Cabrera's Detroit Tigers were one of the best teams in the world, while Trout's Angels were not.

In 2014, though, the Angels are a winning club, 36-28, contending closely in the American League West and holding the league's top wild card position. Trout is a great player building another great season. Might be too early to say so, but this could be Trout's year.

Cabrera's batting numbers merited the American League triple crown in 2012 and those numbers were, on the whole, even better in 2013, though not good enough for the triple crown in the later case. In each case, though, the Tigers won their division.

Trout's batting numbers weren't as good in either case, but he brought so much more to the table as a defender and base runner that he truly was at least as good overall. Unfortunately, for Trout, the fortunes of his club took him out of the running for serious MVP consideration. Cabrera won it both times.

Famously, Trout still was farming in Salt Lake when the Angels went off to their terrible start in 2012, coming up a month into the season and still making enough of a mark to win Rookie of the Year. In large part because of Trout, the Angels rallied to the fringe of the AL wild card race and Trout entered the MVP conversation. Last season, the Angels started even worse and never recovered, dooming Trout's MVP candidacy.

The last month has seen a re-birth of the Angels as a contender and made Trout, once more, a front runner for the league's MVP award. Through games of June 10, Trout batted .294, and he’s rising quickly. His power numbers of 12 homers and 45 RBIs put him on schedule to surpass his previous highs of 30 and 97. He's the everyday center fielder, where he is a plus performer.

What's more, Trout is becoming a game breaker, not merely a great player. On May 15, hit a three-run homer in the bottom of the ninth against the Tampa Bay Rays, giving the Angels a 6-5 win. It was Trout's first walk-off RBI of any kind in the big leagues. On June 6, Trout hit a grand slam with the Angels down, 5-1, in the bottom of the eighth. It came against White Sox left-hander Chris Sale, who, up to that moment, had allowed only two runs in 31 innings against the Angels during his career. The Angels ended up beating the Chicago White Sox, 6-5.

All that production is coming with plate discipline. For the season, Trout has 68 strikeouts and 35 walks, so he stands to strike out 160 times, which would be a career high, and he's only walking about half as much. But he has 14 walks and 16 strikeouts in his last 20 games. He's finding it.

When we look in the numbers at why the Angels are 20-11 starting with May 9, it's clearly the pitching, especially the starters. The Angels' staff is putting up a 3.54 ERA during that run, compared with an ERA of 3.96 across the AL this season. The Angels this year are second in the AL in starter ERA (3.61) and their 27 wins by starting pitchers also is second. Opponents are batting .231 against the Angels, which is another second-best mark across the league.

Thus, the Angels are just a tinge better than the average AL offense during this hottest period of their last three seasons. And where would they be without Trout? During that period, Trout is .303/.393/.586/.979. Trout has scored or driven in 35 of the club's 134 runs during that period, accounting for 26 percent of the club's offense (16 runs and 25 RBI, minus six homers).

Unlike the last two seasons, the Angels are an interesting, exciting and successful club in 2014. They've rallied to within 2 1/2 games of the Oakland Athletics in the AL West.

This club has many success stories. Albert Pujols still isn't nearly the player he used to be, but he leads the club with 15 homers and he's running well. Erick Aybar is once more a dynamic player. Colin Cowgill is a pleasant surprise, as the Angels are 34-21 when he plays and 2-7 when he doesn't. Garrett Richards has become a force in the starting rotation, allowing only one earned run in his last two starts (15 innings) to feed his total output of 6-2 with a 3.09 ERA.

But Trout is in the middle of the whole operation. And the way he's going right now, he's going to finally win that MVP award, so long as the Angels keep winning with him.