Angels lose Richards, but not division

The Angels apparently will have to compete for the rest of this season without pitching ace Garrett Richards, who went down with a ghastly knee injury Wednesday night in Boston. But they are all but assured of going to the playoffs. And their team to beat in the American League West, the Oakland Athletics, aren't the team they were a month ago. 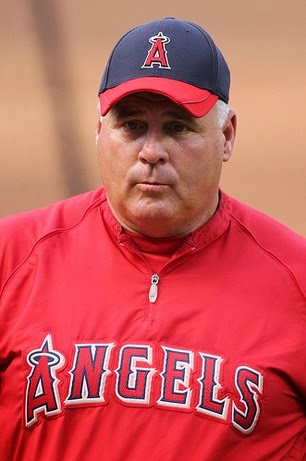 Angels manager Mike Scioscia will have some juggling to do with his pitching staff for the rest of this season (Keith Allison/Creative Commons Attribution-Share Alike 2.0 Generic license).

Did the Angels lose the American League West Wednesday night?

Well, they won their game Wednesday night, 8-3, on the road against the Boston Red Sox, which increased their division lead over the Oakland Athletics to 1 1/2 games, their largest lead of the season.

They also lost their best pitcher.

The moment Angels right-hander Garrett Richards fell to the ground on his way to first base as he attempted to cover the back end of a double play in the second inning, this club's aspirations appeared to go dark. Richards laid out on the ground clutching his left knee. An object of skeleton that should have been inside his body appeared to protrude outside of his uniform. The club's training staff had to roll him over to get him onto a stretcher, then the stretcher had to be loaded onto a vehicle.

The Angels already trailed, 2-0, in the bottom of the second inning at Fenway Park against the Red Sox, the last-place club in the American League East. Into the game came Cory Rasmus as the new pitcher.

And the wheels began to spin. How in the world can the Angels make it through a season-ending injury to their ace pitcher, the hardest throwing right-handed of any starting pitcher in Major League Baseball?

But the Angels have not disappointed us this year, and there's so much to like about this club that it's hard to lose confidence. Even in the midst of that disaster, the Angels came back with a five-run fifth inning to take a 6-3 lead. Rasmus survived 2 1/3 innings without further damage, then Mike Morin tossed a shutout inning, then Fernando Salas, then Kevin Jepsen, then Joe Smith, then Huston Street. And the Angels kept their season moving.

The Oakland Athletics lost earlier in the day in their own park, 8-4, to the New York Mets. The Athletics are reeling. From the day their general manager, Billy Beane, made the deal that brought him so much praise – the deal that tore the heart out of their everyday lineup in exchange for left-hander Jon Lester from the Red Sox – they are 8-11.

It isn't that Cespedes was enjoying such an awesome season, but he wasn't bad, running a 115 OPS-plus with the A's. Since the deal, his OPS-plus with the Red Sox is only 80. But the man who came back to Oakland in the deal to replace Cespedes as the A's left fielder, Jonny Gomes, is OPS-plussing only 60 for the Athletics.

Beane really disrupted his club's balance offensively. Before the deal, the Athletics ran out lineups with up to five guys who could hit, meaning four guys who couldn't. With Cespedes gone, they never have more than four players in their lineup who can hit, and sometimes they have even fewer.

But the Angels now have fewer pitchers, and this is a club that seems to have fewer pitchers every day. They've already lost lefty starter Tyler Skaggs for the season, and they're still waiting for lefty reliever Joe Thatcher to come back from the disabled list.

But no loss hurts like losing Garrett Richards, who entered Wednesday's game with a 13-4 record and a 2.53 ERA. And as Wednesday night ended, there was no indication of what they can expect from Richards. The club announced during the game that Richards suffered a left patellar injury. The patella is the kneecap.

The big question, of course: How significant? Can Richards be back in time for the postseason?

But there's a lot else no one knows, which is why we can't answer the question with which we began, the question of whether or not the Angels lost the AL West simply because they lost their ace pitcher.

The one source of help on which the Angels can not depend is a trade that would depend upon some pitcher clearing waivers. Because the Angels, at 75-50, have the best record in the Major Leagues, they are last in turn on the waiver wire. Any club that wants to stop the Angels from acquiring a pitcher can simply stake a claim on that pitcher. Reports tell us that Texas Rangers right-hander Yu Darvish and New York Mets left-hander Jon Niese have cleared waivers, but those would be hard deals to make.

In the minors, the Angels have little to trust. Their only pitcher at Triple-A Salt Lake who even conceivably belongs in a poor big league rotation is lefty Wade LeBlanc, who couldn't last more than one inning for the pitching-starved New York Yankees after they took him from the Angels on waivers in June. The Yankees released LeBlanc and the Angels signed him two days later. They might be glad now that they did.

At Double-A Arkansas, the Angels have 24-year-old lefty Michael Roth, who is 10-6 with a 2.82 ERA. Chances are, he gets the start the next time Richards' turn comes up.

First, we don't know that Richards would have been the same pitcher down the stretch that he'd been approaching the stretch. He had never, in any professional season, thrown 160 innings. When he went down Wednesday night, Richards was on 169 1/3 innings. The Angels never had any guarantee of how well Richards would pitch in September with all those added innings on his arm, though they would much rather have found out. Either way, it was unknown how Richards would respond to the added innings, and we can't assume that the pitcher they've lost is the pitcher we've seen all season.

Second, the Angels almost certainly are in the playoffs, already. With 37 games left in their season, they are 7 1/2 games ahead of the AL's sixth-place team, the Seattle Mariners. If the Angels (75-50) go 18-19 the rest of the way, the Mariners (68-58) would have to go 26-10 and the fifth-place Detroit Tigers (68-56) would have to go 26-12 the rest of the way to knock the Orange County club out of the postseason. We have little hope, after watching Richards go down, that he will pitch any time before next spring, but the Angels do have that much cushion, just in case there is enough time to bring him back for the playoffs.

Third, Athletics aren't 10-feet tall anymore. They were 59-36 at the All-Star break, a .621 winning percentage, which projects to 101 wins over a full season. Since the All-Star break, they are 15-16. For the remainder of the season, there is no scheduling advantage, to speak of, either way. The Angels and the A's have 10 games left against each other, starting this weekend with three in Oakland. The Angels have seven games left against Seattle, and the A's have six. Every other remaining opponent for the Angels and A's this season has a losing record, except for this: The Angels have one game against the Cleveland Indians (64-61) and three against the Miami Marlins (63-63).

Editor's note: All numbers in this piece are from Baseball-Reference.com.