After taking the heat for over-reaching his baseball operation to saddle the Angels with a poor club in 2013, Angels owner Arte Moreno doesn't receive enough praise for reversing his own course and giving the baseball people room to operate in 2014. The Angels are back to being an elite club this season, and Moreno's new patience has a lot to do with it. 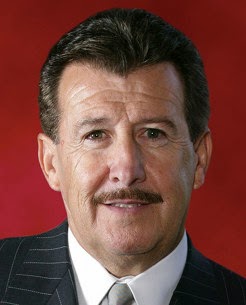 Angels owner Arte Moreno has left his baseball club to his baseball people in 2014, and the results are obvious (public domain image).

They don't give an annual award for the most reviled person in baseball across Los Angeles. If they did, they'd have to retire it, anyway. Frank McCourt would win it every year. Still.

If, however, active participation were a requirement, then it's hard to imagine a more likely winner in 2013 than Angels owner Arte Moreno.

As of one year ago right now, no rhetorical task across the game would have been much tougher than defending Moreno's leadership of the Angels' baseball operation. In short, he was an ignoramus and a busy-body, the proverbial  – and all-too-real – rich guy with a baseball club for his plaything. These guys never understand the game because they think baseball is like other sports, replete with game faces and outcomes dictated by brute force.

Moreover, Moreno is a marketing guy who saw his club as a marketing project because, you know, when you're a hammer, everything is a nail. Thus, Moreno reached past his baseball people for two consecutive offseasons, signing the likes of Albert Pujols, C.J. Wilson and Josh Hamilton to $500 million worth of free-agent contracts while the organization's player development operation languished as one of the least promising across professional baseball.

It wasn't really until last season that the entire mess came home to roost. Pujols produced his worst season ever before finally going on the disabled list with a plantar fasciitis in his left foot, the Angels made the characteristic error of thinking Hamilton could whisk into a new position (right field) just because he was on a deal worth an annual $25 million, the club decided to sign Joe Blanton  instead of giving those starts to Garrett Richards, and a disjointed club turned in a disjointed season.

The Angels finished 78-84, their worst season since 2001, when they finished 75-87 in Mike Scioscia's first year as the club's manager. The Angels that had been built by Bill Stoneman had run their course, and the new direction was not promising. Some fans believed Moreno should respond with something big, like firing Scioscia, or firing general manager Jerry Dipoto.

But Moreno did nothing of the sort. In his darkest moment as the Angels' owner, Moreno instead did something really big.

He pointed the finger at himself. In interview after interview across the national media (since he deals so seldom with the local media), Moreno made himself accountable, said he's the owner and it's on him. Moreno couldn't be led into selling out his high-priced players for under-producing. He refused to pin it on his manager, and he said outright that he wanted to give Dipoto's systems a chance.

So, when the 2013 season ended amid speculation that Moreno might actually eat the last five years of Scioscia's contract, there was, indeed, no news. And throughout the offseason, there was little news – just a couple of trades and a couple of changes on the coaching staff, the kind of events to characterize an ordinary offseason for any club. But there was no news, no headline news, no big initiative designed to scream across the media.

It was, in fact, rather a dull offseason, an offseason of baseball people making baseball decisions. The owner kept his hands off.

Now, if we didn't want to give Moreno credit for seeing the light, that would be easy to do. Surely, it wasn't an attractive proposition for the Angels to go into the big free-agent market again, since the club opened the season with a $155 million payroll and has so much money committed to future seasons that another big contract would remove any remaining flexibility, particularly with the club angling for a long-term deal with Mike Trout. Additionally, anyone looking at the talent on this club had to know it really wasn't as bad as the 2013 season showed.

In fact, the Angels enter Wednesday's game against the Dodgers at Angel Stadium with a 67-45 record, the second best across Major League Baseball. And it has a lot to do with the fact that the owner didn't make a chaotic situation even more chaotic by going crazy on his top people. Instead of pressing the baseball operation with marketing initiatives, Moreno let the baseball operation operate a baseball club.

Everyone around the Angels, it seemed, could take a deep breath, which is for the best because the Angels run like mad and they needed a breath. The Angels are back to playing baseball a lot like we remember from their best days under Scioscia. The focus is on players already with the club. The new guys giving new blood to the club are their own guys.

There's Richards, starting every fifth day instead of some mediocre free agent. There's Erick Aybar at his demonic best, and Howie Kendrick hitting at his best, and Trout having his best year ever, and Jered Weaver getting hitters out without his old stuff, and C.J. Cron up from the minor leagues to lend a bat, and so on.

The owner has left the club alone, and the club is responding with a fierce brand of baseball unlike any other club around the game today. No club in the major leagues is more aggressive on the bases or on the field or, for that matter, in the batter's box.

But also credit the owner for allowing all of that to happen just by staying away. It's not an easy thing to do. If any of us owned the Angels, or any other club, we'd probably have our mitts all over it. Some of us might figure out when the bottom goes out that we don't know what we're doing, but you can look around sports and find plenty of owners who never get the picture. Moreno has.

A year ago, Moreno was the most reviled man in baseball across Los Angeles. This season, Moreno is the city's unsung baseball hero.