Perhaps Angels general manager Jerry Dipoto isn't a genius, but he clearly has something on the game's annointed genius, Oakland Athletics general manager Billy Beane. All Dipoto did this year was rebuild his bullpen on the fly, which is one reason why the Angels go to the last two weeks of the regular season with a 10-game lead in the American League West. 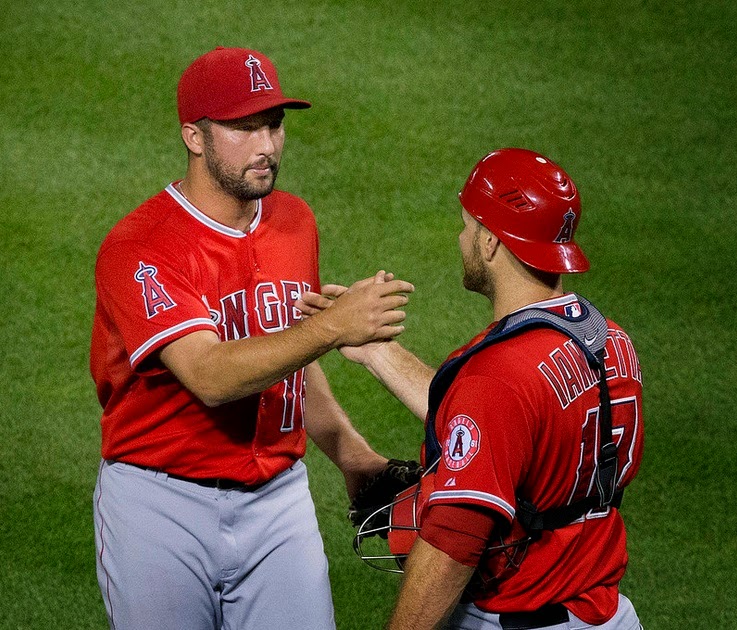 A common scene for the Angels: Huston Street finishing off a save. He's done it 14 times since the Angels picked him up on July 19 (Keith Allison/Creative Commons Attribution-Share Alike 2.0 Generic license).

We often learn lessons about baseball, and the lesson often is the same lesson: Things aren't always as they seem.

Which of these clubs now holds a 10-game lead in the American League West, having all but clinched it with two weeks left in the season? And which club has plummeted through the standings to the point at which its all-but-certain playoff position now is anything but certain?

When this all gets written up, the Angels will be in the books with their first division title since 2009, making an inspired comeback from a miserable start in 2012 and a miserable season in 2013. The story to be told will not include anything about Angels general manager Jerry Dipoto tearing a big piece out of his everyday lineup to add a pitcher he didn't need. But it will say quite a lot about the bullpen that Dipoto has been rebuilding since sometime late last season, and particularly on the fly during the summer of 2014.

How dark was that night in Boston on Aug. 20, when Garrett Richards crumbled to the ground trying to cover first base in the second inning? They drove him off the field and to the hospital. Everyone could tell that Richards was down for good, which meant the Angels were supposed to win this division without a pitcher who was 13-4 with a 2.61 ERA.

It turned out to not be a very dark night at all. The Angels fell behind the Boston Red Sox, 2-0, on the very play that put Richards out for the season, then went down, 3-0, in the third on a homer by David Ortiz against Richards' replacement, Cory Rasmus. But that was as bad as it ever got. The Angels rallied for an 8-3 win that night. They tacked up a five-run inning, which has become common, to forge an easy win. The Oakland Athletics lost, 8-5, to the New York Mets, improving the Angels' lead in the AL West to 1 1/2 games.

The Angels picked up another half-game the next day with another win in Boston, then went to Oakland for a three-game series with a two-game lead. That lead was gone after the A's won the first two, but the Angels picked up the final game for a one-game lead, only to lose it the next night. That next night was to be the first start for which the Angels would need a work-around to replace Richards. The man they put on the job, Wade LeBlanc, wasn't very good, the Angels lost, 7-1, to the Miami Marlins, and an Athletics victory tied the division again.

So, that takes us through the games of Aug. 25, which was the very last moment when the Angels didn't hold first place all by themselves. From that night going to the games of Sept. 13, the Angels were unstoppable – 15-2. Even if the Angels didn't score an average of 6.9 runs during that stretch, they would still have won a lot of those games because the pitchers were tossing a 2.82 ERA. That's the whole staff, which includes some of C.J. Wilson's worst run of pitching in his three years with the Angels.

Think about this. The Angels are out Richards, Wilson can't last more than five innings unless the Angels already have scored 10 runs, Jered Weaver only now and then can put 89 miles per hour on his fastball, the other two starters are people named Matt Shoemaker and Hector Santiago ... and the Angels are getting everybody out.

During that very same run of dates, the Athletics were 4-13. Their offense scored three runs per game – 51 in those 17 games – from Aug. 26 through Sept. 12. In one of those games, they scored 11 runs, so we can just as well think of it as 40 runs in 16 games. The A's were scoring five runs per game as of July 31, the day they dealt left fielder Yoenis Cespedes to the Red Sox for left-hander Jon Lester. Their pitching staff, fortified by the in-season acquisitions of Lester, Jeff Samardjiza and Jason Hammels, tossed a strong 3.21 ERA in those last 17 games, but that's still not as well as the Angels are pitching without their best pitcher.

We do not attempt to explain things like this. We just look on in awe. Angels manager Mike Scioscia is doing something very right with his pitching staff, not the least of which involves massaging the rotation schedule to make the Richards turn come up as seldom as possible. That turn came up three times in those 17 Angels games, and the Angels won all three. They won all three without actually having a starting pitcher to take the starts. Instead, Scioscia has fashioned it as bullpen night, the kind of exhibition usually to be found only in the college game and the low minor leagues, and made it a major league happening.

Bullpen night made its glorious debut on Aug. 30 at Angel Stadium against the Athletics, when Rasmus, Michael Roth, Yoslan Herrera, Fernando Salas, Jason Grilli, Kevin Jepsen, Joe Smith and Huston Street joined forces for a three-hit shutout with 11 strikeouts in a 2-0 win against Samardzija and the Athletics. In 28 innings of pitching on these bullpen nights, the Angels are 3-0, tossing a 2.57 ERA by allowing eight runs (all earned) on 21 hits with 10 walks and 23 strikeouts.

Except for Roth and Jepsen, all of the relief pitchers named just now have been acquired by the Angels within roughly the last year. The pitcher who has been with the organization for the longest, Rasmus, arrived just before the non-waiver trading deadline last year (on July 29, 2013) in a deal with the Atlanta Braves for Scott Downs. Grilli and Street have arrived just this summer, and that's leaving out Joe Thatcher, a key left-handed specialist acquisition who has been felled by injury.

Editor's note: All advanced statistics in this piece are from Baseball-Reference.com, unless otherwise indicated.