Are the Giants and Dodgers cooking a greater rivalry?

The Dodgers and San Francisco Giants are always in each other's business. But they have too seldom, in the last several decades, both been in the business of winning the championship at the same time. This year, now that it's all but certain that both clubs will be in the playoffs, they might be getting back to what once made the rivalry great. 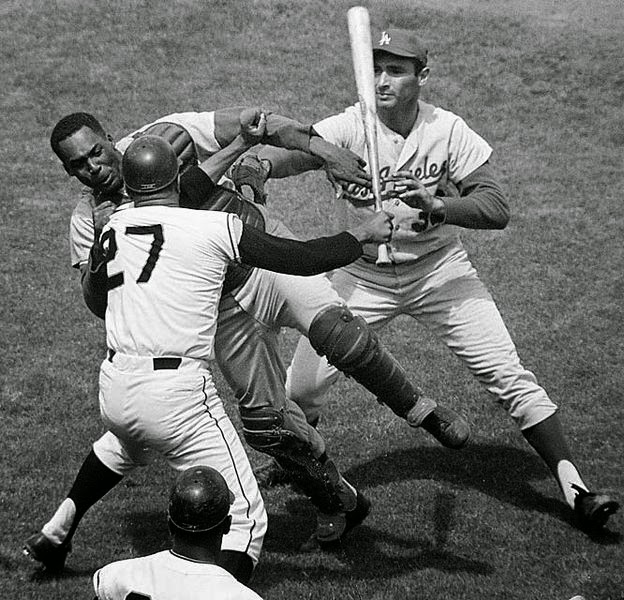 Juan Marichal's 1965 attack against Dodgers catcher John Roseboro was a peak moment in hostilities between the Dodgers and San Francisco Giants way back when these clubs often tangled for the National League pennant (Copyright holder unknown. It is believed that this low resolution image of an event in the Dodgers-Giants rivalry that is referenced in this text about the rivalry constitutes fair use in the absence of a public domain image.).

The Dodgers and San Francisco Giants came to the final week with the National League West on the line, and it's been a while since these long-time rivals really fought over anything important.

It's all but sacrilegious to say so in these parts, but that's just the way it is. Whatever places in the standings these clubs have occupied through the years, they somehow always shadow each other, always getting into each other's business. But as far as being a rivalry of importance throughout the game, we might just as well have written it off as an artifact of the 20th century. Twice before in the 21st century, the Dodgers and Giants finished first and second, in whatever order, in the NL West, and only one other time has that been the case since 1971. Of the episodes in which the Dodgers or Giants came up big to spoil the other's chances, they were 20th century events.

So, the Dodgers and Giants met just now at Dodger Stadium with first place on the line in the final week of the season. The Dodgers entered the series with a 4 1/2 game lead, meaning the Giants could have whittled it to 1 1/2 game with a three-game sweep going to the final weekend. It could have come off the way it has happened so many times back in history, with the Dodgers entering as the big men in the standings only to be brought back to earth by the Giants, or vice versa.

It didn't actually happen that way this time because the Dodgers have Zack Greinke and Clayton Kershaw, two forces greater than history in today's baseball. Greinke and Kershaw won the last two games of the series, with Kershaw playing his characteristic all-around game Wednesday night as the Dodgers won the clincher, 9-1, in front of their home crowd.

So, the Dodgers won two of three to put the NL West in the bag for this year, but the Giants still are all but in the playoffs, needing either one win or a loss by the Milwaukee Brewers in the final weekend of the season to clinch the National League's second wildcard, in which case they are headed to Pittsburgh for the wildcard game against the Pittsburgh Pirates. And that raises the possibility that the Dodgers and Giants really aren't done with each other, yet, because they still could meet in the playoffs.

The rivalry, great as it is and has been for about the last 100-odd years, could do with that boost.

A great national rivalry is about championships. A lesser local rivalry is about Schadenfreude. That's the basic flavor of the Dodgers and Giants for about the last four decades. It's usually been about one club struggling before rising to ruin the other's aspirations. The Giants have done it more often to the Dodgers than the other way around. The Giants did it to the Dodgers in 1980, 1982, 1991 and 1997, in each case coming up from the bottom to keep the Dodgers from the top in late-season events. The Dodgers did it to the Giants in 1982 (they actually did it to each other in 1982), 1993 and 2001. We might also put 2012 in the column for the Giants, who beat the Dodgers only once in the final three-game series of the season at Dodger Stadium, but it was enough to keep the Dodgers out of wildcard contention and the Giants went on to win the World Series.

But none of those events were titan struggles. They all were one club keeping the other from celebrating, which isn't nothing, but it isn't enough to establish a championship rivalry, either. The Dodgers and Giants may be central adversaries in each other's narratives, but the central rivalries in the narrative of Major League Baseball are elsewhere. There has been, really, only one of those in the last generation, and it has all but died, as well.

We mean, of course, the New York Yankees and Boston Red Sox, who always worked a peculiar backyard antagonism, but never became a championship rivalry – a rivalry of  importance across the game – until the Red Sox finally were just about good enough to take down the Yankees for high stakes and, then, actually were good enough to finish the job. All of America rolled its eyes at times over the national media's promotion of the Yankees and Red Sox as the only two clubs that really mattered – in relation to each other and across the game – but the national media wasn't wrong.

In every season of wildcard playoffs except for this year, at least one of those clubs went to the playoffs. During the height of that rivalry, the Yankees and Red Sox met in the playoffs three times in six years (1999, 2003 and 2004), the winner of that series ultimately winning the World Series in 1999 and 2004. That rivalry mattered up until now, when it doesn't.

Those with the West Coast bias often shrugged about the Yankees and Red Sox, saying the rivalry between the Dodgers and Giants is better. But they had to argue using history, ancient history by today's short attention standards. The Dodgers and Giants have a much longer and deeper championship rivalry, and we might even say it has been broader, taking place, as it has, along two different coasts. But that was a while ago.

The Dodgers and Giants had their best days as a rivalry during the 1950s and the 1960s, finishing first and second, in whichever order, six time in 15 years across the National League, which didn't have divisions (1951, 1952, 1954, 1962, 1965 and 1966). Those days produced some of the game's most enduring moments, like Bobby Thompson's "Shot Heard 'Round the World" in 1951 to complete the Giants' surge to overtake the Dodgers in 1951, or the ghastly bat beating by Giants pitcher Juan Marichal against Dodgers catcher John Roseboro in 1965, as these clubs fought over the pennant. Those days were the height of the rivalry. When the leagues divided into divisions, the Giants and Dodgers finished one-two in the NL West in 1971.

Now, though, we've come to something like the real deal, for we're looking at the likelihood of the Dodgers and Giants both going to the playoffs, along with the possibility that they could face each other some time in October. That gave the Yankees and Red Sox real spice, those years when those two clubs would play each other 25 times.

We love the Dodgers and Giants out here. Vin Scully grew up in New York loving the Giants before launching his career of 65 years broadcasting the Dodgers, and he still always has one eye on the Giants, and that's part of what makes the whole thing work. But he doesn't often get to put both eyes on both teams playing against each other for everything. None of us do, either along the West Coast or across the country. But, maybe, that is changing this year.