The Angels put together a huge four-game sweep of the Oakland Athletics at Angel Stadium during Labor Day weekend, increasing their lead in the American League West to five games. The Angels heroes were pitchers, none of whom arrived with any fanfare this season. 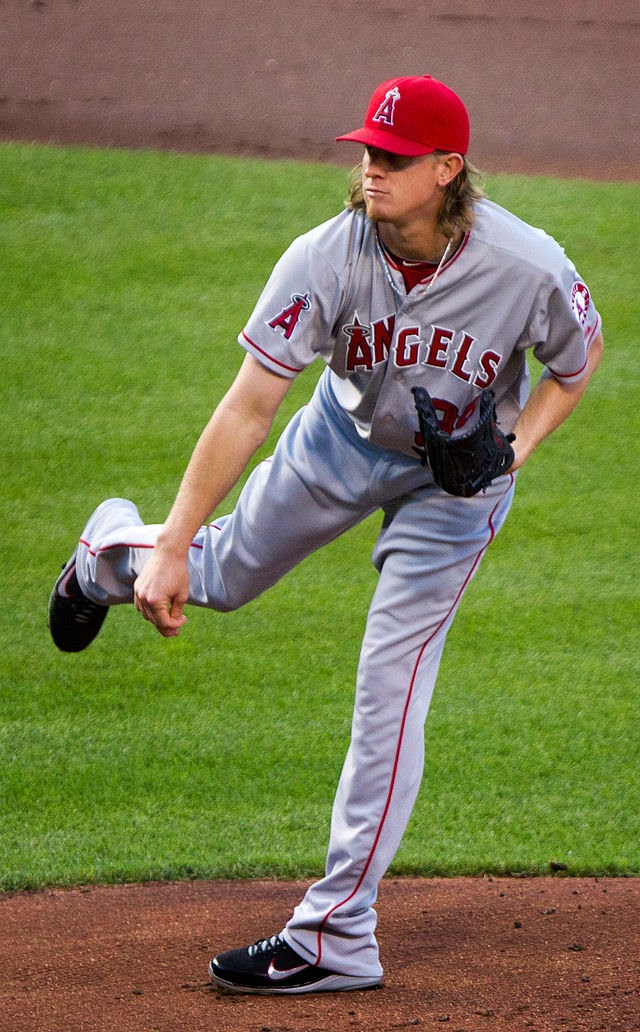 Angels pitcher Jered Weaver doesn't have his fastball, but he has guts and guile, which was enough to defeat the heralded Oakland Athletics acquisition, Jon Lester, in a key game during the past weekend (Keith Allison, (UC International crop)/Creative Commons Attribution-Share Alike 2.0 Generic license).

The Angels begin the rest of their life today after building a five-game lead in the American League West with a remarkable four-game sweep of the Oakland Athletics at Angel Stadium during Labor Day weekend.

It has become tiring to labor over the grand error made by Oakland general manager Billy Beane when he traded his left fielder and the anchor of his batting order, Yoenis Cespedes, to the Boston Red Sox for left-hander Jon Lester, who he really didn’t need. But the weekend in Anaheim brought that error into the sharpest possible focus.

The series began with the only truly dramatic game in the bunch, a 4-3 Angels victory in 10 innings on Aug. 28. The A's entered the night one game down in the division and had their best pitcher, Sonny Gray, on the mound. But Gray came a bit unglued in the second inning. Josh Hamilton, Howie Kendrick and Erick Aybar began the inning with consecutive singles, the last of those driving in Hamilton for the game's first run. Then, Gray threw two wild pitches to place Kendrick on third and Aybar on second. A two-out single by Gordon Beckham drove in both runners and gave the Angels a 3-0 lead.

The Angels, countering with struggling left-hander C.J. Wilson, held that lead until the fifth, when the A's began hitting line drives. A leadoff single by Brandon Moss, followed by Geovany Soto's double, gave the A's their first run, then Coco Crisp hit a line-drive single to knock in Soto. In the sixth, the A's tied the game, 3-3, on solo homer by Josh Donaldson.

So, it became a battle of bullpens. And the Angels, who have been rebuilding their bullpen throughout the season, won. Five Angels relievers combined for 4 1/3 scoreless, hitless innings. The Angels won it in short order in the bottom of the tenth against Oakland reliever Ryan Cook. Albert Pujols led off with a walk and took third as he hustled out a single to center field by Hamilton. Kendrick hit a sacrifice fly to right field to drive in Pujols.

We witnessed that night the start of a remarkable occurrence  – the first four out of 29 consecutive scoreless innings by the Athletics, the AL's top scoring team, against an Angels rotation that is aged, unheralded, under-manned – everything but a sure thing.

The second game, played on Aug. 29, was the definitive game. Not quite as improbable as the third game, perhaps, but what the second game said is in the standings today. The A's sent Lester, the guy for whom they spent heavily to win just this game, against Angels right-hander Jered Weaver, who is doing it all now with guts and guile. It was barely a fair fight.

The A's didn't reach base until Donaldson hit a double with two out in the fourth. They didn't get another hit until Sam Fuld's single with one out in the sixth. By then, the Angels had all the runs they needed, those coming on Chris Inannetta's two-run homer with no one out in the fifth after Aybar led off against Lester with a single.

When the Angels batted in the bottom of the sixth, we could see the A's come apart at the seams. Watching the wheels come off of a baseball team is never a pretty sight, but the A's flailed all the way through August and it was just a matter of time. That time came with two out and nobody on, when Donaldson, the A's best player, made a fielding error allowing Kendrick to reach. Next, Eric Sogard, playing out of position at shortstop, made a throwing error, moving Kendrick to third and allowing the hitter, David Freese, to reach second base. Aybar then dropped a bunt in front of Lester and reached first base to load the bases. Flustered, Lester walked Iannetta for force in a run and give the Angels a 3-0 lead.

Pujols homered to make it 4-0 after seven innings, at which point Weaver departed, having allowed only three hits. Joe Smith and Huston Street finished out a 4-0 win the the Angels, giving them a robust three-game lead.

The importance of that game for the Angels can hardly be over-stated. They went to the third game of the series now assured that they would end the series with the division lead, even though their pitching plan for the third game – "the Garrett Richards start" that they will forever be trying to fill – was not one to inspire great confidence. That plan was Cory Rasmus, a reliever not even approximately stretched out for a start. The A's would go with Jeff Samardzija, famously acquired from the Chicago Cubs this summer.

Then there's Crisp, the key and unsung player of the A's surge in 2012 and their continued excellence in 2013. The A's committed themselves to Crisp as their leadoff hitter and center fielder on June 14, 2012, putting Cespedes in left field. Crisp was batting .172 with a .466 OPS. The A's were 28-35. From that point forward, Crisp batted .296 with a .857 OPS. The A's went 66-33, charging from five games back with 10 days left in the season to overtake the Texas Rangers for the AL West title.

The 2013 season was more of the same. The A's spent the entire season either in front or very close to it and easily won the division by five games. Crisp, the leadoff center fielder, had a solid year, if not great, tacking up a 4.3 WAR. He led the club with 93 runs scored and gave the club a solid all-around presence.

Beane has mentioned, correctly, that the A's already were struggling offensively when they traded Cespedes at this year's non-waiver trading deadline, which further mystifies the Cespedes trade. But there's no mystery that the A's decline offensively can be indexed some bit to Crisp. From July 5 to today, Crisp is batting .183 with a .559 OPS. The A's actually peaked offensively on June 4 (.253/.340/.421/.761). From that point to now, they are .244/.311/.372/.683.

Perhaps, then, it's not such a huge surprise that eight Angels pitchers, led by a three-inning start by Rasmus, shut the A's out on three hits to beat Samardzija, 2-0. The A's mounted one threat, that against lefty reliever Michael Roth, in the fourth. A walk, a single and an intentional walk loaded the bass, then Athletics manager Bob Melvin pinch-hit right-handed Jonny Gomes for left-handed Josh Reddick and Angels manager Mike Scioscia brought in right-handed Yoslan Herrera for Roth. Herrera induced a ground ball on which Kendrick at second base made an outstanding play for a double play to end the inning.

And with Reddick out of the game, the Athletics were without a left-handed stick who might have punished the ensuing parade of right-handed Angels relievers. The Angels walked out of the game with a 2-0 win no one could have predicted or expected, as well as a four-game lead.

The final game, on Aug. 31, was icing on the cake, an easy 8-1 Angels win behind rookie right-hander Matt Shoemaker, this season's surprise sensation, who improved his marks to 14-4 and a 3.14 ERA with seven innings of five-hit, shutout pitching. The Angels sacked Athletics left-hander Scott Kazmir with six runs in the second inning. The A's finally scored in the eighth. Angels, 8-1.

With only three games left between the Angels and the A's (Sept. 22-24 in Oakland), the Angels now still have a two-game cushion even if the A's win all three, which means the A's still have to be two games better than the Angels against everyone else just to force a one-game playoff for the division title. None of that seems likely to happen, especially after the Angels exploded and the A's imploded during these last four games in Anaheim.