The last two teams eliminated this year from playoff contention have two different stories to tell. The Seattle Mariners made a big move up after years of straggling in the AL West. The Milwaukee Brewers made an even bigger move up in the NL Central, but they then made a huge move down, casting themselves as the most unfortunate flops of the regular season. 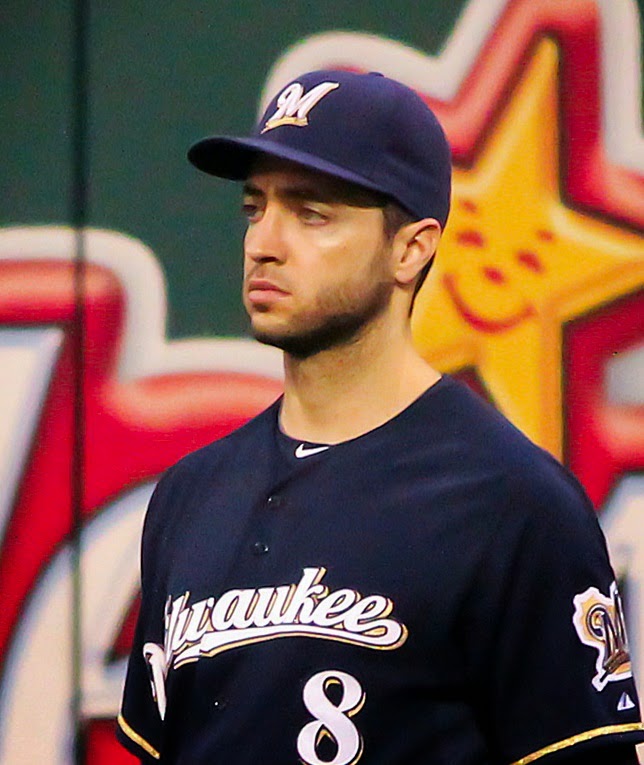 Ryan Braun's production disappeared during the last weeks of the season, and the Milwaukee Brewers are missing the playoffs after leading the National League Central for much of the year (Johnmaxmena2/Creative Commons Attribution-Share Alike 4.0 International license).

The playoff races just finished advanced ten clubs to the postseason, and it also eliminated a few.

The two that lasted the longest before going away were the Seattle Mariners in the American League and the Milwaukee Brewers in the National League. Each, therefore, has a sad story to tell, but the Mariners still can spin the outcome positively, and the Brewers can't.

The Mariners made absolutely no sense signing free agent Robinson Cano for 10 years at $240 million, considering how many holes they had to fill in their offensive lineup. But Cano produced a terrific season (142 OPS-plus, 6.4 WAR), just what the bubblegum card says he'll do, and the Mariners had a chance because of him.

The Mariners began the year making no other big changes in their lineup, though they added Kendrys Morales and Austin Jackson as the year went along. Even with reinforcements, the Mariners actually lost nearly three games of offensive WAR from 2013 (down to 17.2 from 20.1) and the Mariners also declined in the American League rankings in OPS, falling from tenth (.695) to last (.676). They  improved from 12th with 624 runs to 11th with 634 runs.

The Mariners would have been lost without Cano. Baseball-reference.com puts him at 34 Runs Above Average (RAA) in 2014, and there's no one else in that lineup except for Kyle Seager (29 RAA). The Mariners, as a club, are minus-44 RAA.

So, credit Cano for his super-human feat of preventing Seattle's tepid offense from getting worse, but the Mariners wouldn't have climbed without much better pitching behind Felix Hernandez and Hisashi Iwakuma. The Mariners replaced a lot of poor starts from 2013 with better starts this year from James Paxton (120 ERA-plus) and Taijuan Walker (142 ERA-plus). Chris Young (100) and Roenis Elias (95) weren't bad.

Less heralded than the Cano acquisition last winter was the Mariners' free-agent signing of Fernando Rodney as their closer. But it was no less important. Rodney filled a need with 48 saves. The rest of the bullpen lined up behind him. The Mariners shot up to first in American League ERA (3.17) from 13th (4.31).

The Mariners won only 71 games in 2013, and you can see how much Cano and Rodney brought to their mix, bringing them to 87 wins in 2014. Going forward with the Mariners, we wonder if the good pitching in the middle of their staff this year was a fluke, but we're sure the club's terrible offense isn't. They mattered on the last day of the season for the first time in a while, and they might matter a little more if they can add a bat or two.

The more maddening case is the Brewers, who managed to madden us even though no one actually expected them to climb in a division that sent three other clubs to the playoffs last year. The Brewers don't have a No. 1 starter, and they've never filled the hole left at first base when Prince Fielder departed as a free agent three years ago. Then, the season started, and the Brewers went out 20-7 through April 29 with a 6 1/2-game lead in the NL Central and a 2.59 staff ERA. Halfway through the season, they were still in first place, 49-32 with a 5 1/2-game lead.

The Brewers were baffling. They didn't seem that good, and you knew the Cardinals were hanging around. But the Brewers were solid during the second half of 2013 (42-39), and they did that without Ryan Braun and Francisco Rodriguez. Maybe they were on to something.

They weren't. By the midway point of the season, the Brewers already inflated their staff ERA by a full run to 3.59. Their staff ERA for their second 81 games was 3.75, putting their full-season ERA at 3.67 in a league averaging 3.66.

The bulk of that margin was a horrendous final six weeks of the season, during which the Brewers were 11-25 and they fell like a stone through the standings. That run began as the first-place club with a 2 1/2 game lead, and it ended in third place, eight games out. Braun really vanished down that stretch – splitting .236/.314/.358/.672 with four homers.

So, the Brewers limped in at 82-80, barely knowing what hit them, except that they didn't hit anything. But there's something else worth noting. Take a look at these standings from the National League Central division, counting only the last 81 games of 2013 and the first 81 games of 2014 for each club.

Turns out, the Brewers had a pretty good year in there. It's just not a year that anyone would recognize, roughly July 2013 through June 2014. But it's a solid year of games showing a club that can put it together for a period of time. It helps a lot if all those games are during the same season. And the problem for the Brewers is that, in each of the last two years, they have stunk up half of their season. Just as they tumbled at the end of 2014, they started 2013 at 32-49 in their first 81 games. In those 162 games during the past two years, the Brewers are 65-97, a last-place team.

This season, in a sense, the Brewers were both a first-place team and a last-place team. In the postseason, they are no place.