The Angels might lament that they didn't last longer in the American League playoffs, but it's hard to argue that anyone in the AL was going to beat the Kansas City Royals, who are headed to the World Series. The Angels are headed to 2015 with a strong club with a good chance of making that trip. 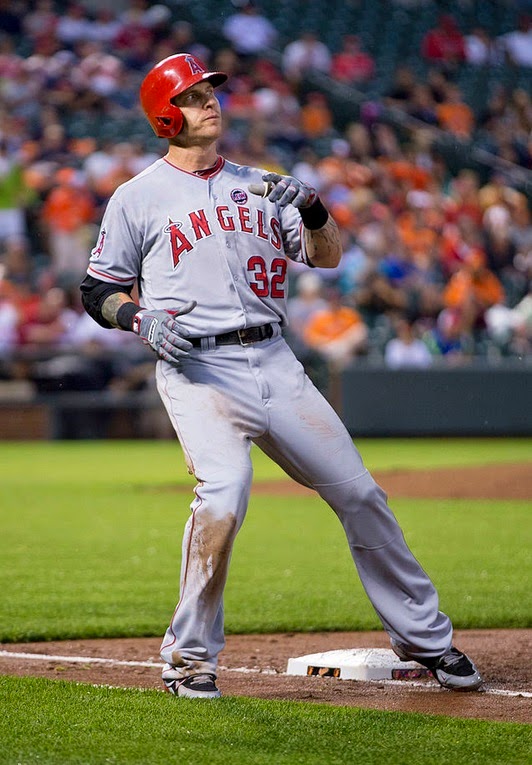 The Angels need a big bounce back from Josh Hamilton if their five-year, $125 million contract with him is to be vidicated (Keith Allison/Creative Commons Attribution-Share Alike 2.0 Generic license).

An old saw in sports says that offense fluctuates and defense is a constant. The saw doesn't exactly explain what happened to the Angels in their American League Division Series (ALDS) loss to the Kansas City Royals. But it's a pretty good description.

The Angels finished the regular season with the best record in the game, 98-64, and they did it with hitting. And they lost the ALDS in three games because hitting fluctuates.

That's really all there is to it. The Angels didn't hit for three days, and they lost three games. They batted only .170 in the series and scored only six runs, despite hitting four homers. It can happen to anyone, and it happens all the time. Playoffs magnify that, but they do not make it remarkable. It's probably, indeed, more likely to happen to a good team in the playoffs than the regular season because, in the playoffs, you're not playing the Houston Astros or the Minnesota Twins. No one gets to the baseball playoffs without being good enough to win them, and that's even after expanding the playoffs to five clubs in each league.

Thus, we find no deeper meaning in the Angels' rapid playoff demise. Explanations? It's three games. The season is a marathon containing many moments, good and bad. If the good moments outnumber the bad, you win in the end. The playoffs are only a moment, and, if the moment isn't right, you lose, right now, and it's over. The End.

The flip side to all of that is the Royals, who were sky high when they played the Angels and have remained that way ever since. After sweeping the Angels in a three-game ALDS, they swept the Baltimore Orioles in a four-game American League Championship Series (ALCS). The Royals will begin the World Series tonight at home against the San Francisco Giants.

The Angels are just going to have to process all of this. It can't be easy, but it's not as if they rolled over against a club they should have beaten. As well as the Royals are playing, it's ridiculous to say anyone should beat them.

During the six-month grind, the Angels were the best team in the game, only to be dispatched in three games by a club that couldn't even win a division. Responses along the lines of "So what?" are in play here. What's not in play is any notion that there's some flaw in the club's design that make it unsuitable for going deep into the playoffs. Perhaps, should the Angels flop in the playoffs the next couple of years, we might detect patterns, but, right now, it's just three games in the dumpster.

The Angels remain an outstanding club, and they took a huge step forward in 2014. They added two very good starting pitchers to their mix, Garrett Richards and Matt Shoemaker, entirely from within their organization. Missing Richards for the postseason certainly didn't help. At the very least, a healthy Richards would have enabled the Angels to delay C.J. Wilson's dreadful Game 3 start until Game 4. Might have harshed the Royals' high a little bit, changed the energy and given the Angels a chance to come back in the series. But maybe not.

Angels general manager Jerry Dipoto should get a nod or two for rebuilding the bullpen on the fly during the regular season. That was some fine work. Bringing in Huston Street to replace Ernesto Frieri for holding ninth-inning leads gave the whole operation a new breath of competence and confidence. With offseason free agent Joe Smith around to carry the eighth, the sixth and seventh innings become opportunities for mixing and matching the limited abilities of certain relievers against the limited demands of those circumstances.

Cole Kalhoun became the regular right fielder this year, and he probably is the guy we saw. Mike Trout finally will win his MVP award. Erick Aybar and Howie Kendrick once again were the players we've been seeing for a few years. The top catcher, Chris Iannetta, is a good baseball player.

It quickly became irksome to hear the television commentators during the playoffs talk about the greatness of Albert Pujols in the postseason when anyone with just a lick of sense knows he isn't even approximately the same guy who used to win all those big games for the St. Louis Cardinals. Pujols once was the greatest player in the game. Now, he might be one of the best five first basemen in the American League. Still a very good player. But he won't build his Hall of Fame case on his years with the Angels. That doesn't mean he won't help the Angels win, or that the Angels need to upgrade at first base. He will make the day a little better, but he will not save the day. Those days are long gone.

Going forward, the Angels have the pieces together to win the division again in 2015, but there are a couple of red flags. Josh Hamilton and C.J. Wilson each will be in his age 34 season with lots of contract left and decline almost certainly in the future. The Angels received good value in the first couple years of Wilson's deal, but he fell off badly in 2014 and now has two years and $38 million of contract remaining. The Hamilton signing can only be characterized as a grievous mistake. He has delivered almost nothing in two seasons with the Angels and he enters 2015 with three years and $89 million of contract left.

Those are two old players eating a lot of salary and diminishing the club's flexibility by that much. Word from Anaheim has it that the Angels will work their club around the edges. They certainly want to come in with a payroll beneath the taxation threshold of $189 million and, according to the estimates on baseball-reference.com, they figure to come in around $160 million if the pick up all their contract options and go through arbitration with all who are eligible. So, they have a little room.

The club is set in the outfield with Calhoun in right, Trout in center and (lamentably) Hamilton in left. They've got Pujols at first, Kendrick at second base and shortstop Aybar all under contract for 2015. They've also got catcher Iannetta under contract and his backup, Hank Conger, is due for arbitration.

The only pending free agents of much interest are utility infielder John McDonald and reliever Joe Thatcher, both of whom would be well worth signing and neither of whom figure to be expensive. McDonald earned $850,000 in 2014 and he's well worth a million. Thatcher is a hard-throwing left-hander who would really give the Angels a lift if he's healthy. Questions about Thatcher's health and effectiveness, as well as the direction of the market, might take signing him out of the question for the Angels, but they do need a left-handed specialist out of their bullpen.

The Angels still have the pieces, and the question now is whether the pieces will fit again. A productive fitting of the piece would include left-hander Tyler Skaggs continuing his development and being around the whole year, and there's still the matter of how Richards will come back. But it's all there. It's still just a matter of fitting together.