The Boston Red Sox didn't go to the Major League playoffs in 2010, but they won the First Division, thanks largely to a combined 12-1 record against the two Los Angeles teams. The Angels barely escaped relegation to the Second Division for 2011, but the Dodgers weren't so lucky. 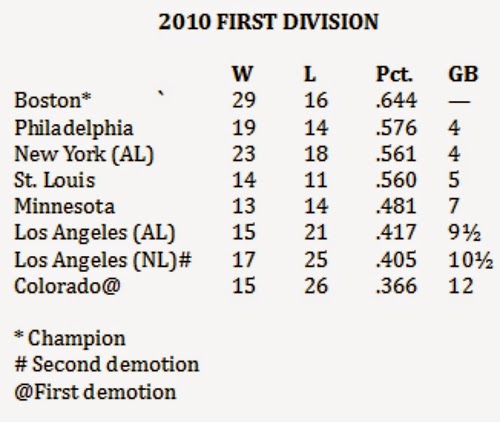 The eight clubs that went to the 2009 Major League playoffs were assigned to the First Division for 2010. Three of them — the Minnesota Twins, New York Yankees and Philadelphia Phillies — returned to the playoffs in 2010.

But it was the Boston Red Sox winning the 2010 First Divison by four games.

The Red Sox cleaned up on the Angels (9-1) and the Dodgers (3-0), then broke two games better than even against the rest of the First Division.

The Angels barely escaped relegation to the Second Division for 2011, but the Dodgers and Colorado Rockies did not. The Dodgers were 2-10 against American League teams in the First Division, sealing their demotion. The Rockies finished the Major League season 83-79, but they had losing seasons against every First Division team they played, except for their 2-1 mark against the Red Sox.