The New York Mets were clearly the best team of this bad lot, winning more than two-thirds of their Fourth Division games to win easy advancement to the Third Division for 2011. The Washington Nationals won the second promotion, beating out the Cleveland Indians and Kansas City Royals by less than two games. 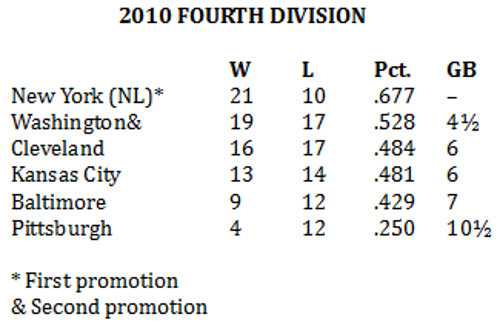 The Fourth Division in this competition began with the three teams in each Major League with the worst records from 2009 — the Baltimore Orioles, Cleveland Indians and Kansas City Royals in the American League and the New York Mets, Pittsburgh Pirates and Washington Nationals in the National League.

(The Mets and Arizona Diamondbacks actually tied for the third-worst record in the NL at 70-92, but the Diamondbacks were placed in the Third Division for their 5-2 record against the Mets in 2009).

The Mets quickly and easily outclassed this tawdry field, blitzing to a 21-10 campaign to win easy promotion to the Third Division for 2011. No one else was especially good, but the Nationals at least finished with a winning record (19-17) to win the second promotion.

This was a bad lot in 2009 and remained that in 2010, except the Mets, who made a bid for .500 at 79-83 during the regular season. Every other team in this group won fewer than 70 games during the Major League season.