Freshly promoted to the First Division for 2011, the Tampa Bay Rays and San Francisco Giants overtook this field to finish one-two. The defending champions, the Boston Red Sox, fell to third. The Los Angeles Angels might not deserve relegation for 2012, but they're getting it, anyway. The Minnesota Twins, though, clearly deserve their relegation. 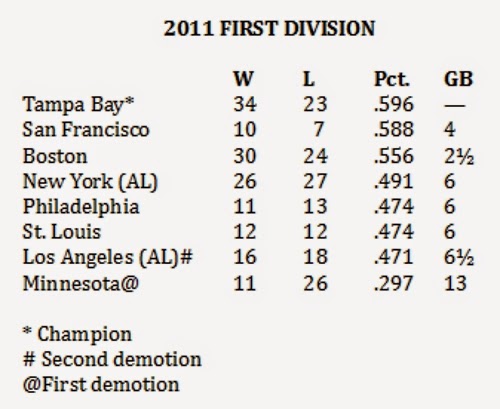 The Rays were 21-15 combined against the New York Yankees and Boston Red Sox, taking them most of the way to their 34-23 record that won the First Division championship in their first year at the top level. The Rays were promoted with the Giants to the top tier entering the 2011 season, and they ended up one-two in the top tier standings.

The Minnesota Twins began their decline from American League Central contender in 2011 with an 11-26 First Division performance, by far the worst in this group. The Angels, at 16-18 in the First Division, weren't terrible, but it wasn't enough to escape relegation to the Second Division for 2012.