The Milwaukee Brewers cruised through the Fourth Division with an .800 winning percentage, not surprising, considering they also had the second-best record in the National League. Two years into these standings, the Baltimore Orioles, Kansas City Royals and Pittsburgh Pirates still haven't even produced winning records against this bottom tier. 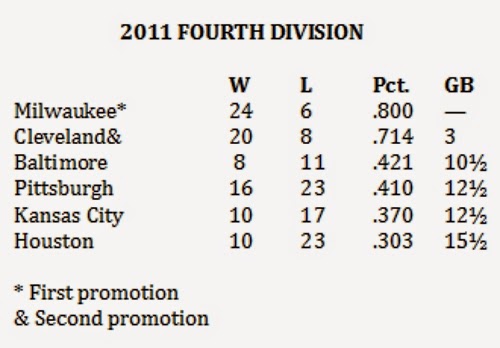 The Milwaukee Brewers tacked up a 96-66 record during the 2011 Major League season, the second best mark in the National League. It stands to reason that they would ease through the low-class Fourth Division competition, which they did.

Thus, the Brewers, freshly relegated to the fourth tier entering the 2011 season, now will be promoted back to the Third Division for 2012. They won the Fourth Division in 2011 with a 24-6 record. Their .800 winning percentage is the best of any team in the first two years of this promotion-and-relegation scheme.

It doesn't take much of a team to be promoted out of this bunch, and the Cleveland Indians (80-82 in the Major Leagues) weren't much of a team. But they finished 20-8 in the Fourth Division and won promotion to the Third Division.

The bottom team in this group, the Houston Astros, weren't even the worst team in the Third Division in 2010. But they turned up a Fourth Division mark of 10-23 in 2011. With their .303 winning percentage, the Astros were even worse against the Fourth Division than they were during their dreadful Major League season (56-106, .346).

Two years into these standings, the Baltimore Orioles, Kansas City Royals and Pittsburgh Pirates have yet to break even in the Fourth Division, let alone win promotion to the Third Division.