The Texas Rangers had the best record in the Second Division for 2011, but they only played two teams, so they don't get promoted. Instead, the Cincinnati Reds go to the top level, just two years after starting these standings in the Third Division. The Los Angeles Dodgers, just relegated for 2011, are going back to the top in 2012. 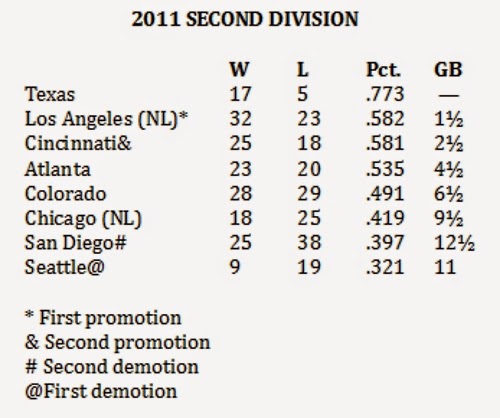 The Texas Rangers finished 2011 with the best record in the Second Division. However ...

A couple of important rules concerning promotion and relegation in these standings need to be addressed.

One, which doesn't apply here, states that no team can be promoted without at least 10 wins, and no team can be relegated without at least 10 losses. Obviously, the schedules within these divisions can't be balanced, because we're playing them off the actual Major League schedules and, sometimes, a team just won't play enough to produce a representative performance. It would seem wrong for a 9-3 team to be promoted over a team that goes 21-9, and it would seem pretty cheap to demote the 3-9 team instead of the 9-21 team.

The second rule, which does apply here, says a team must play against at least three teams in its division to be promoted or relegated. In this case, the Rangers played only two teams -- the Seattle Mariners, against whom they finished 15-4, and the Atlanta Braves, against whom they were 2-1. Should a team be promoted to any division, let alone the First Division, for going 15-4 against a terrible Seattle team in 2011? We don't think so, either.

So, the Rangers can claim the Second Division championship, but they can't be promoted. Instead, the Dodgers and Cincinnati Reds are moving up. The Dodgers, of course, had just been demoted to the second tier after the 2010 season. The Reds, who started this thing as a Third Division team in 2010, already will be in the First Division for 2012.

Going down in 2012, are the Mariners, who had those struggles with the Rangers, also going 0-3 against the Braves and 5-1 against the San Diego Padres. The Padres really got a lot of work in the Second Division, and didn't do it very well, finishing 25-38. They actually finished 1 1/2 games more out of first place than the Mariners, but their .397 percentage topped the Mariners (.321).