After getting thumped out of the Second Division in 2010, the Detroit Tigers dominated the Third Division in 2011 and they will go back to the second tier in 2012. Joining them in promotion will be the Arizona Diamondbacks, even though they barely broke better than even in this group. 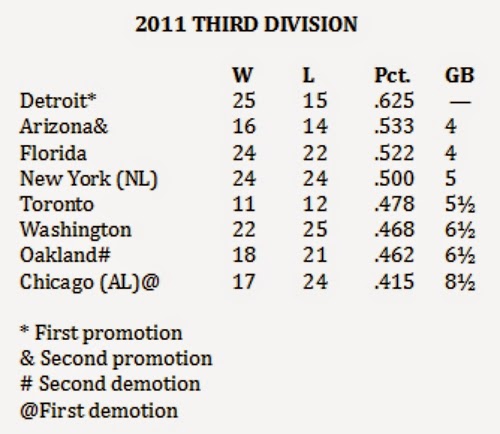 The Detroit Tigers won their first of four straight American League Central titles in 2011. Let's see how fast they rise through these ranks.

The Diamondbacks (16-14, .533) got the nod by percentage points over the Florida Marlins (24-22, .522). The New York Mets, fresh to the Third Division, finished just a game behind Arizona and Florida, while the Toronto Blue Jays again just missed rising a level after finishing 1 1/2 games behind the Diamondbacks and Marlins.