A tight race in the Center League ended with the Detroit Tigers holding off the Cincinnati Reds. The Reds prevailed, though, in the South Division, though by a much smaller margin than they held over the St. Louis Cardinals in the National League Central. 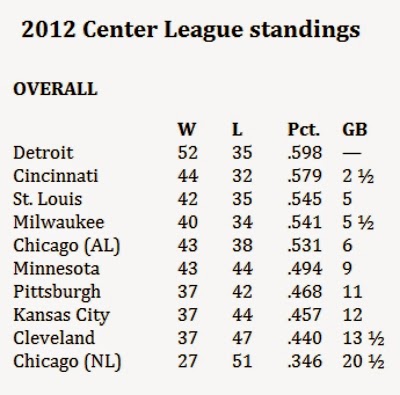 The Detroit Tigers held off a September rally from the Cincinnati Reds to capture the Central League title in 2012.

Entering the final month, it still was crowded near the top. The Tigers led the St. Louis Cardinals by two games, the Reds by 2 1/2, and the Milwaukee Brewers and Chicago White Sox by 3 1/2 games each. But the Reds won six straight during the next street, while the other clubs tread water. When the Tigers lost both games of a double-header to the Minnesota Twins at home on September 23, the Reds pulled into a tie with 10 days left in the season.

The Tigers had another wind, though, and won six of their next seven to take a 1 1/2-game lead in the Central League entering the final series of the season for all teams. The suspense ran out quickly, as the Reds dropped a 4-2 decision at St. Louis and the Tigers took a 6-3 win at Kansas City on Oct. 1 for a 2 1/2-game lead with two games remaining. With that same victory, the Tigers also clinched the American League Central.

Reds fans subjected manager Dusty Baker to blistering criticism, alleging that he tanked the Central League race because he was too satisfied with already clinching the NL Central.

But while the Cardinals were idle in the Central League for the next week, the Reds won two of three each from the Milwaukee Brewers and the Pittsburgh Pirates, extending their lead in the South Division to 2 1/2 games entering the final series of the season, a three-gamer in St. Louis. With their Oct. 1 victory, the Cards pulled within 1 1/2 games with two remaining.

On Oct. 2, though, the Reds scored two in the sixth against St. Louis starter Chris Carpenter, thanks to RBI singles by Jay Bruce and Dioner Navarro, to take a 3-1 lead. Facing the Cardinals' three, four and five hitters in the bottom of the sixth, Baker controversially pulled right-hander Mat Latos to save him for the National League playoffs.

Reliever Sam LeCure picked his manager up by retiring the Cards in order in the sixth. However, the Cards put two on with one out against LeCure in the seventh. With the tying run on base, it appeared the Reds could be choking away the South Division. Then reliever Sean Marshall defused the situation by retiring the next two hitters. Marshall breezed through the eighth and Aroldis Chapman took down all three St. Louis hitters in the ninth, giving the Reds a 3-1 win to clinch the division. 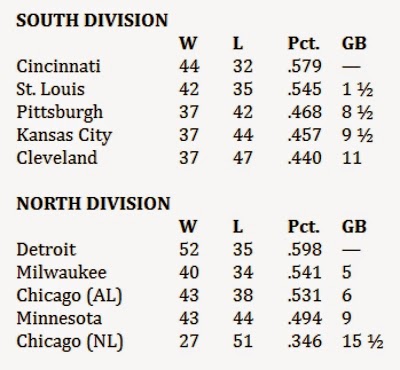