A thrilling season in the East League ended with four clubs finishing within 2 1/2 games of the top. In the end, the New York Yankees won the first East League title, thanks much to a huge day for second baseman Robinson Cano. 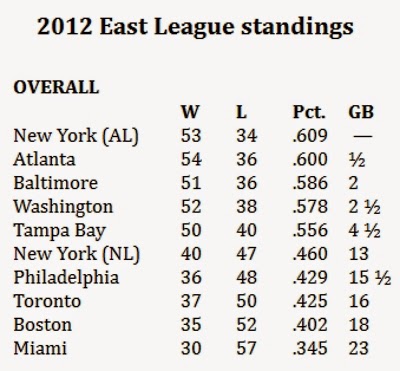 The East League began, in one man's imagination, in 2012, when interleague play put the teams of the American League East against those in the National League East.

As Major League Baseball rotates the divisions for interleague play, the East League, like the Center and West Leagues, only convene only every third year. It's like the World Baseball Classic that way. We'd like to see it permanent, and have proposed a way to conduct the East, Center and West Leagues alongside the traditional American and National Leagues.

A couple of interesting results cropped up in the East League relative to the AL East and NL West divisions.

For example, the Washington Nationals won the NL East by four games over the Atlanta Braves. However, the Braves won the East League South Division by 2 1/2 games, with the Baltimore Orioles finishing second and the Nationals third.

The power in the East League clearly was in the South Division, with four of the five teams finishing 10 games above .500 or better. By contrast, the New York Yankees were the only North Division team to finish with a winning record, coming in 13 games ahead of the New York Mets.

Overall in the East League, the Yankees squeezed past the Braves by one-half game. The Yankees beat the Braves in four of their six meetings, all between June 11-20.

The Yankees, Braves and Nationals all had a chance entering the final weekend. The Braves were idle within the East League that weekend, but they held leads of one game against the Yankees and 1 1/2 against the Nationals.

Needing only a win, the Yankees left no doubt about it in a 14-2 stomp, led by Robinson Cano's four-for-four day with two homers and six RBI. Thus, the Yankees, by one-half game, were the first champions of the East League.

In the real AL East competition, by the way, the Yankees led the Orioles by one game entering the final day. Their victory, along with Baltimore's 4-1 loss at Tampa Bay, gave them a two-game edge for the division title. 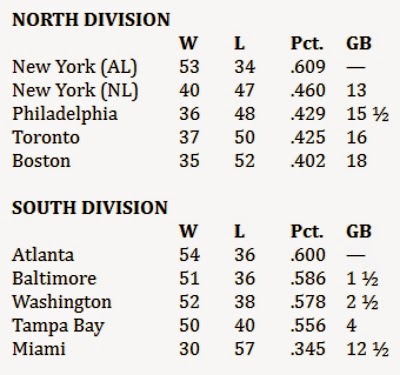