The San Francisco Giants and Oakland Athletics both finished 94-68 across the 2012 Major League Baseball season, but the Giants were the clear winner of the West League, which shows a clear contrast in how the Bay Area clubs succeeded that year. 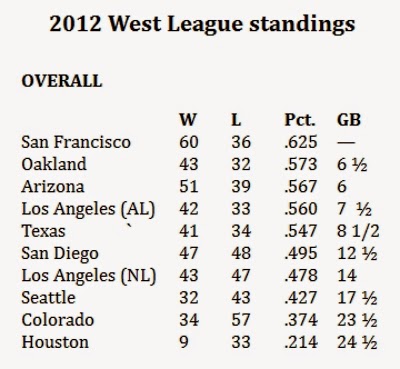 The two Bay Area clubs, the San Francisco Giants and Oakland Athletics, each finished the regular major league season at 94-68. But in the West League, the Giants walked over everyone, including the Athletics.

The Giants won the West League by a full 6 1/2 games on the Athletics, and no one else was even that close.

Evidently, nay, obviously, the Giants dominated in the west as the A's did not. With a mark of 60-36 against the other western clubs, the Giants were 34-32 against all the other clubs. The Athletics were 43-32 in the west, putting them 51-36 against clubs from the other regions.

When we first proposed these regional leagues back in 2012, the Giants and Arizona Diamondbacks were in a tight battle on top of the West League's North Division. In the end, though, the Diamondbacks finished six games behind the Giants.

In the South Division, the Angels won a tight race against the Texas Rangers, prevailing by 1 1/2 games. That's not exactly how it went in the American League West, where the Rangers notoriously collapsed and the Athletics surged to take it by a game, while the Angels finished five games behind the A's. 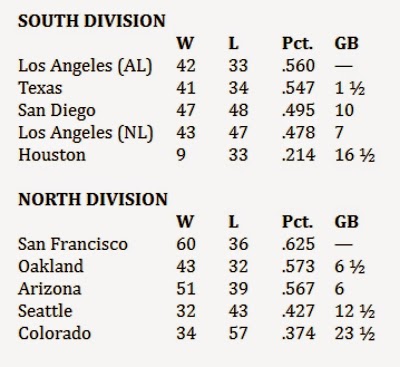