Pitching took the St. Louis Cardinals to a weather-shortened capture of the Dick Allen Award during their first series of the 2015 season this week. The Cardinals split two games with the defending Allen champion Chicago Cubs and now take the prize with them to Cincinnati this weekend. 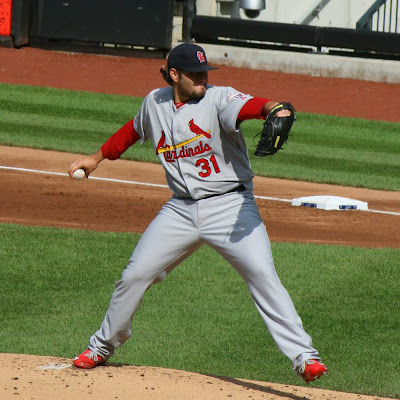 The St. Louis Cardinals are, by far, the most successful team in the history of the Dick Allen Award, which goes to the holder of the National League's Ear of Corn traveling trophy established in 2011.

In all four seasons of the competition, the Cardinals have finished on top in the lion's share of categories, and, in the all-time standings, they lead all of them. And they're back at it in 2015, re-capturing the Allen in a split two-game series to open the season against the Chicago Cubs at Wrigley Field.

The Cardinals prevailed on the total-runs tiebreaker after winning the Sunday night opener, 3-0, then losing the second game on Wednesday, 2-0. Another game between the two clubs scheduled for Tuesday was postponed due to anticipated poor weather.

The Cardinals now take the Allen with them to Cincinnati for a three-game series against the Cincinnati Reds over the weekend.

With their re-capture of the Allen this week, the Cardinals now have won it 16 times. Overall, they have played for the honor 70 times, including a 34-for-49 performance in title defenses. The Cardinals, through the years, have held the Allen for 169 games. All-time in games for the Allen, the Cardinals are 139-91. All of these numbers are on top of the all-time list.

The Reds go into the series on a high after sweeping three games at home from the Pittsburgh Pirates this week. All-time in the Allen, the Reds are 51-47. They have played for it 33 times, including nine title wins and a three-for-12 output in title defenses, so they've only held the Allen for 34 games despite their nine titles. Their best year, by, far, was 2011, when they won five titles, but then defended it only once in six tries.

The Cubs took the prize last Sept. 26-28, winning two of three from the Milwaukee Brewers during the final weekend of the 2014 regular season.
at April 10, 2015