We're itching to introduce some new ways to follow the baseball season, but first we want to complain about why the real way has lost so much allure: the lost connection between the regular season and the World Series. 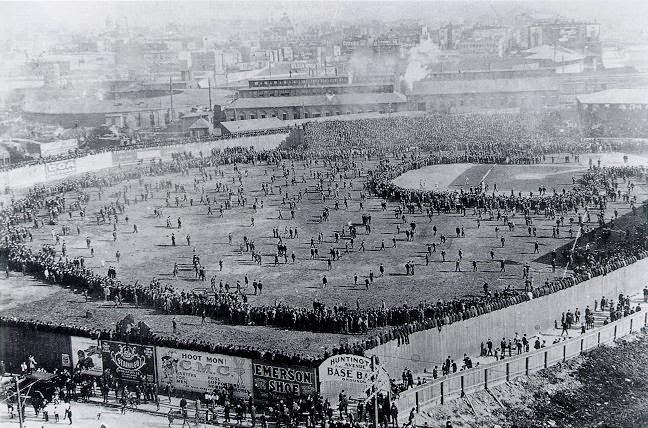 A rooftop view if the 1903 World Series in Boston (public domain image).

The connection between the 162-game baseball season and the World Championship is broken, and barely hanging together.

Complaints about fifth-place teams in the World Series will strike folks as crotchety. Anybody younger than about 40 by now is likely to think inclusive playoffs are the way of the world, the way God planned it. It's not. It's a creation of the suits and the television executives, which doesn't make playoffs bad. But expanded playoffs do not reward excellence over 162 games, so much as they reward pretty goodness.

Some of us who are a long way past the sunny side of 40 remember when you didn't go to the baseball playoffs without some kind of a meaningful championship, at least a division. There was even a time, for those of us well on the dark side of 50, when they didn't even have playoffs in baseball. They played 162 games, undivided, with the best record in each league entering the World Series. You always knew the two teams in the World Series legitimately were the best in their leagues by the measure of 162 games. The World Series in those days, and for more reasons than that, was a huge event across the national popular culture such as it no longer is.

Everybody loves playoffs, all-or-nothing playoffs in which anything not pertinent to the moment no longer matters. And playoff baseball is exciting. Understood. The task here isn't to complain about that (though we are happy to do it, robustly, and at length) so much as to note the dissolution of 162 games as a measure of a baseball team and, maybe, to do a little tiny something about it.

All of the other big spectator sports have big playoffs. Good for them. The National Hockey League (NHL) and the National Basketball Association (NBA) each has 30 teams, each plays an 82-game regular season, and neither bothers to eliminate even half of its teams before the playoffs. In neither case is there a compelling reason to even follow the regular season, unless you absolutely love those sports – and no one is saying you shouldn't. But the regular season competition simply doesn't matter.

In the NBA right now, they're fighting out the last three weeks of the regular season to work out which two teams that can't even break even are ticketed for a crack at the big prize. Hardly a tournament of champions. In the NBA and the NHL, it is not unprecedented for an eighth-place team – a mediocre team – to heat up during the playoffs, catch a bounce and go to the finals or even win the league championship. Congratulations to those teams. But, then, what's the point of that long regular season? Why invest in it? And what does that championship actually say about itself? If a mediocre team can win the championship, then the championship no longer demands excellence. It demands merely that some team find its way through a good month, the way any team can find its way through a good month in a season.

In the major leagues right now, a team that puts up six excellent months is out of the running after losing three straight games to a fairly good opponent in the playoffs. And we now, much too often, don't see the best teams in the World Series. We too often see teams with little to say about 162 games, except that they weren't terrible.

Expanded playoffs are here to stay. It's where the money is. Playoffs make great seasonal television programming. That's why television networks pay what they pay for the rights. But they don't make great champions. They make "unlikely" champions, which now have become so likely that they have lost their novelty power and no longer are even good stories. When Cinderella gets out more than Paris Hilton, then she's no longer Cinderella. Now, she's Kim Kardashian. Cinderella is dead.

We never like playoff expansion, per se, but we thought, foolishly, that the fifth team in each league would dilute the wild cards. If the wild cards were to play each other in a one-and-done game, needing to probably cook their best starting pitchers before the winner went on the road against the club with its league's best record in the next round ... maybe that would be enough hoops to keep them from darkening the World Series. Good enough, said this corner. Gone, we thought, were the days when some team that didn't win anything all year could whisk through the playoffs on a lark and claim the World Championship.

But it took all of three seasons before that wonderful reverie was smashed. So, the Giants and Royals nudged into the playoffs last fall and we saw what happened. Clubs that made it tick all year, like the Angels and Dodgers, like the St. Louis Cardinals, the Washington Nationals, Detroit Tigers and Baltimore Orioles – clubs that attracted our attention for 162 games – were nowhere to be found near the big stage.

And now we hear that the central office is concerned that World Series viewership is down because the game isn't national enough. We believe, actually, that baseball's problem is that isn't regional enough, but that's another topic for another day. More to the point, though, how can you expect the World Series to have a national following when the teams that are playing in it didn't develop a national following during the six-month grind of the regular season?

Of course, the Giants have established themselves in the last few years as a great tournament team, but they were just another team grubbing for a desperate playoff spot last September, which is to say they didn't take the imagination captive. And who, except for Royals fans and hard-core baseball fans, really cared about the Royals before the two final weeks of last September? If capturing the largest possible audience for the World Series requires capturing the non-fan who might just hear about baseball on the side, then putting teams in the World Series that haven't even been mentioned to the non-fan long before then won't get it done, because Cinderella is dead.

Through 1980, by the way, the World Series routinely drew shares of 50 or better. By contrast, the 2014 World Series of fourth- and fifth-place teams was on track to be the worst rated World Series ever (averaging 7.4 through six games), but that Game 7 was quite something, and it pulled a 13.7 rating to bring the whole enterprise up to 8.3 with a 14 share.

Now, 30 years was a while ago, but it wasn't the Stone Age. We didn't have portable telephones and we didn't have the Internet, but we had cable television and VCRs, we had all the same football, basketball and hockey. People read books more, took in more live music and went to more movies. We had plenty else to do. And we still watched the World Series, going on three times as much as we do today.

So, this idea that people don't watch the World Series now because we have so many more options is unavailing at best, vapid at worst. There are at least four or five better explanations, and one of them is right here. Too often, the World Series doesn't resemble the baseball season into which we have invested every day of the last six months. It feels a bit like a cheat. A guy not far from here is as likely as not to throw his hands into the air during the World Series and say, "Another Cinderella story! How unlikely!"

And he will pay his perfunctory, perhaps dutiful, attention to the World Series, but it all feels rather flat. The Cinderalla story is old and tired now, dead even. And the price we pay to perpetuate it is fifth-place teams in the World Series. It's barely worthwhile for anyone except for the central office, when it cashes those national TV checks – $500 million per year from FOX and $300 million per year from TBS. For ratings of about 7.5 on a good night. (ESPN also pays MLB about $700 million per year, though its postseason is limited to one wild-card game per year.)

It was mentioned here some time ago that we would try to offer something constructive and not spend the whole time complaining about expanded playoffs. Consider that another broken promise. Couldn't help it. But we can still redeem 162 games. Here are a few ideas.
at April 01, 2015