The New York Mets are 10-3 after trying all comers in the National League East in the first two weeks of the season. The Mets, who lead the East League with their effort, will get their first crack at the rest of the East when they cross town to visit the New York Yankees later this week. 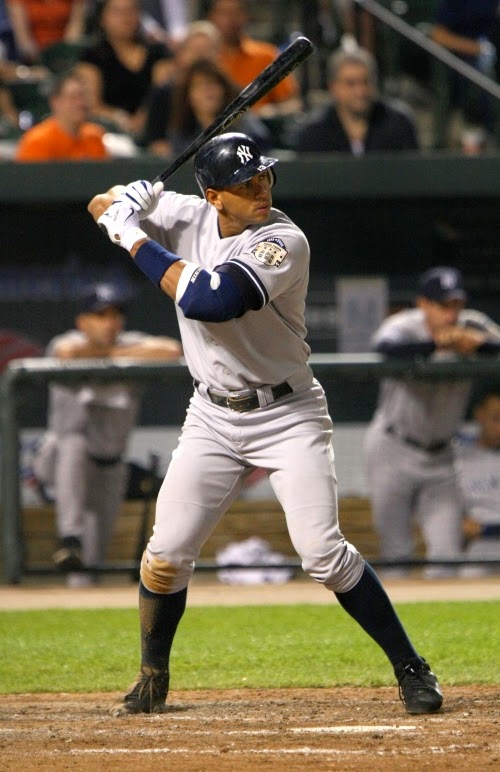 Alex Rodriguez is about the only many in the New York Yankees' lineup who is hitting right now. Which means ... (Keith Allison/Creative Commons Attribution-Share Alike 2.0 Generic license).

An evident danger of reading too much into the early standings is always the likelihood of some team doing remarkably well on a steady diet of one opponent.

But that's not what's happening with the New York Mets, who are off to a nice start, 10-3, after playing each of its National League East opponents for one series apiece. And we can guess that the Mets won't do much, if any, worse when it gets into American League East opponents later this season.

That process will begin later this week, when the Mets go to Yankee Stadium against the crosstown New York Yankees, who have been rescued from the depths of every kind of standings by, of all people, Alex Rodriguez.

Once again, the Yankees are beset by a big batch of under-performing big contracts. But the one big contract they absolutely did not want to pay, their contract with Rodriguez, is about all that's floating an otherwise tepid offense. The Yankees have scored 64 runs through games of April 19, and Rodriguez had either scored or driven in 17 of them, after subtracting his four homers so they don't get counted twice.

Rodriguez, at this moment, is a Top Ten American Leaguer in homers (4), RBI (11), runs (10), on-base percentage (.447), slugging average (.711), OPS (1.157) and, very importantly, walks (nine). We don't preach in the Church of the Walk around here, nor do we necessarily cheer Rodriguez for taking four wide as much as he has. We merely note that opponents will catch on to the obvious pitching plan now against the Yankees, as there's no good reason to give Rodriguez anything to hit when he's surrounded in the Yankees order with luminaries such as Mark Teixeira (.184 batting average), Chase Headley (.234), Brian McCann (.250 with one walk and nine strikeouts) and Carlos Beltran (.184) and Stephen Drew (.167).

The Mets, who are getting terrific starts right now from everyone in their rotation except for Dillon Gee, certainly will work around A-Rod when the New York clubs meet at the end of the week. Before that series comes to pass, though, the Mets pitchers should eat up on the notoriously weak offense of the Atlanta Braves, who venture to CitiField for three games, Tuesday through Thursday.

Inexplicably, the Braves just now scored 18 runs in three games in Toronto against the Toronto Blue Jays. We say "inexplicably," but an easy explanation presents itself. The Jays now rank 22nd among Major League pitching staffs with a 4.50 ERA.

Looking at the East League standings, we see the Mets on top, followed by the Braves, who have lived off weak opposition pitching offered by Toronto and the Miami Marlins (5.10 staff ERA, worst in baseball). The Boston Red Sox and Baltimore Orioles also have winning records, but the Red Sox can't pitch right now (4.73 staff ERA).

It's early, generally, but it's less early in the East League than in the American or National Leagues. And the Mets, so far, are handling the NL side of the east. See how they do when they start playing against the AL side later this week. 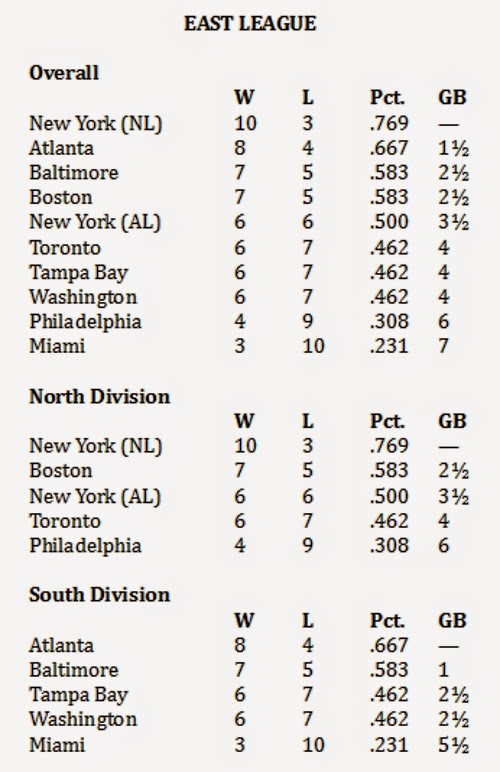