The Dodgers brought two northern opponents to Chavez Ravine last week and cruised to a 6-0 homestand, bringing their winning streak to seven. They have the early lead in the West League. But they travel this week to the haunts of the floundering San Francisco Giants. 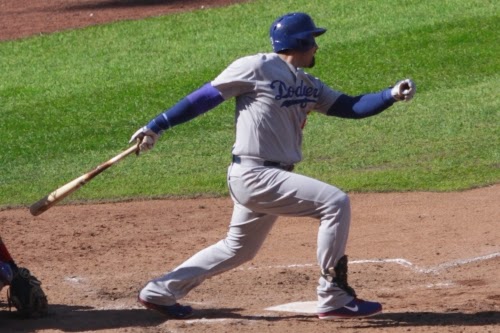 Dodgers first baseman Adrian Gonzalez is swinging as much bat as anyone in the game right now, leading his club to a streaking start in all competitions (TonyTheTiger/Creative Commons Share Alike-Attribution 4.0 International license).

A look at the early West League standings reveals that the balance of power in the west is in the south, particularly Southern California.

The Dodgers (9-3) have won seven in a row after wolfing down two northern opponents, the Seattle Mariners and the Colorado Rockies, in a 6-0 home stand that ended Sunday. The only other club that's even two games above even in the West League, the San Diego Padres, recently enjoyed a good home stand against two northern division clubs, winning three of four against the San Francisco Giants and two of three against the Arizona Diamondbacks.

Maybe some of this will shake back as the Dodgers and Padres hit the road. We could find out quickly.

The Dodgers are in San Francisco Tuesday through Thursday, and even though the Giants are a scuffling 4-10, well, you know the rest.

Right now, though, the Dodgers are riding high. No one in the game is on-basing (.527), slugging (.939), or, therefore, OPSing (1.467) better than Dodgers first baseman Adrian Gonzalez, and he has company in that lineup. Two other Dodgers are in the OPS Top 20 across the Major Leagues — second baseman Howie Kendrick (tenth, 1.105) and rookie center fielder Joc Pederson (20th, .990).

So, the Dodgers are doing fine offensively without Matt Kemp, Hanley Ramirez and Dee Gordon. They probably ought to be better defensively with those three replaced, respectively, by Pederson, Jimmy Rollins and Kendrick. Pederson has been terrific with the glove. Rollins, Kendrick and Gonzalez have been less so. But the Dodgers lead all of baseball with a team OPS of .885, which covers a lot of defensive problems.

Much was made during the winter about the Padres bring in a new outfield, and it's worked out well so far, with Kemp (162 OPS-plus), Wil Myers (114) and Justin Upton (191) all hitting. But they haven't outshined the Padres' new pitchers, which is why the Padres are fourth across baseball in staff ERA at 2.79. Give it to newcomers James Shields (2.84), Brandon Morrow (1.29) and Craig Kimbrel (1.42 with four saves). 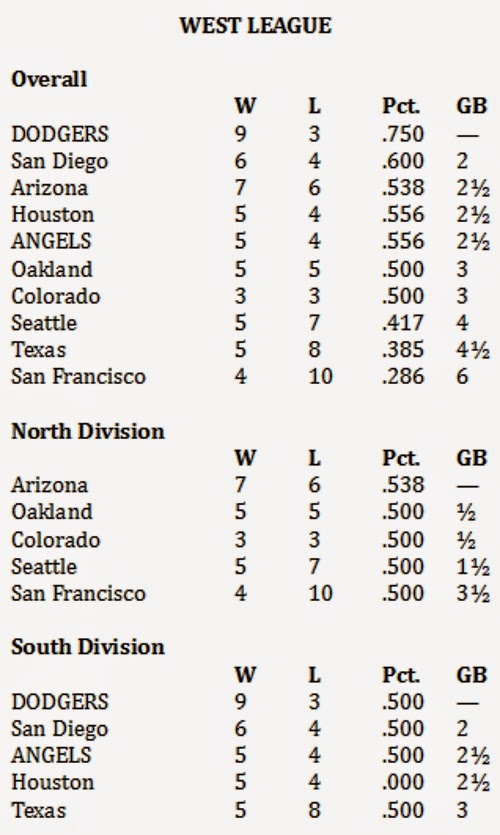