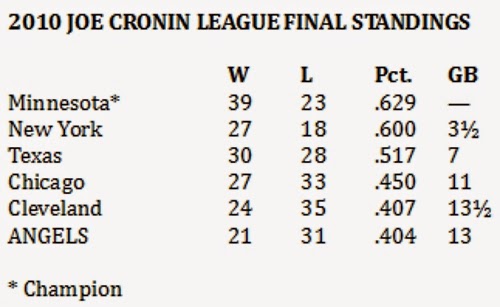 The Minnesota Twins had a big year in 2010, winning not only the American League Central Division, but something of a double championship in these idiosyncratic half-leagues, taking the Joe Cronin League and the Bud Selig West.

The other AL playoff team in this mix, the Texas Rangers, finished third in the Joe Cronin League, seven games behind the Twins.

In the real American League competition, the Yankees actually had the best record among the Joe Cronin group, even though they went in as the wildcard with 95 wins. The Twins finished the AL season with 94 wins, while the Rangers won the AL West with 90 victories.

The Twins also won the Bud Selig West, which is the western half of the blend of teams from the Joe Cronin and Chub Feeney Leagues.