The Angels won the Bud Selig West for the first time in 2011, but they had to sweat out the World Series between two other Bud Selig West teams, the St. Louis Cardinals and the Texas Rangers. The Angels prevailed, in the end, by two percentage points. 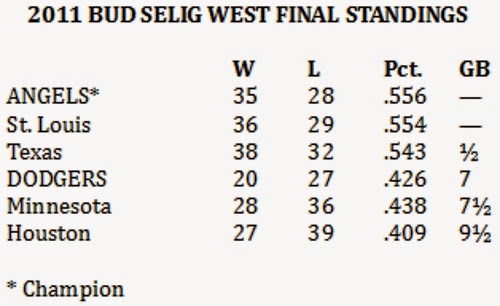 The Angels took the title by two percentage points over the St. Louis Cardinals, .556 to .554.

Entering the World Series, the Angels and Texas Rangers were in a flat-footed tie on top, both at 35-28. The Cardinals, at 32-26, were one-half game down.

As it happened, the World Series broke the one and only way it could have for the Angels to prevail.