The New York Yankees, who have won more World Championships than any other professional sports franchise in world history, won the Joe Cronin League for the first time in 2011. The Yankees beat out the Angels and the Texas Rangers for the honor. 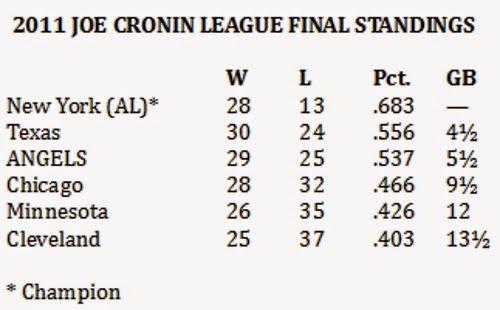 The Minnesota Twins fell from first to worst in the American League Central from 2010 to 2011. They didn't fall quite that hard in the Joe Cronin League, barely missing the cellar.

The New York Yankees prevailed by 4½ games on the Texas Rangers and 5½ games on the Angels. The difference, much of it, anyway, was the Yankees' 7-2 record against the Rangers head-to-head.

The Angels made a huge move up after finishing last place in 2010.

The Twins finished in fifth place, 12 games out of first. The Cleveland Indians were the last-place club in this group, finishing 13½ games behind the Yankees.