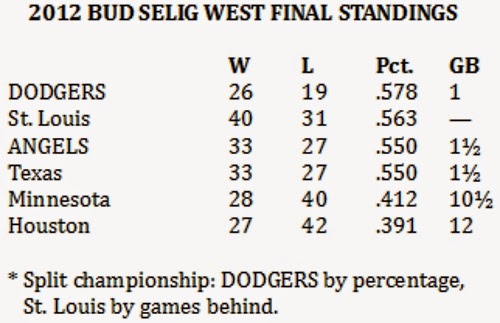 A tight 2012 race in the Bud Selig West resulted in something of a split championship.

The Los Angeles Dodgers had the best record on a percentage basis, going 26-19 for a .578 percentage. However, the St. Louis Cardinals have a lot more games from year to year in the Bud Selig West. At 40-31, the Cardinals were more games over .500 than the Cardinals, even though their winning percentage (.563) was a little lower.

The Angels and Texas Rangers, who finished seven and eight games behind the Chicago White Sox in the Joe Cronin League, both were right there in the Bud Selig West, each finishing 1½ game behind the Cardinals with identical winning percentages of .550. The Rangers were 5-1 against Chub Feeney teams (the Houston Astros were the only one they played), while the Angels were 4-2 against the Chub Feeney League.