The Cincinnati Reds won the Chub Feeney League once again in 2012, making themselves the only Chub Feeney winner in the first three years of the competition. With the league expanding in 2013, the Reds will go down as the only club to win the Chub Feeney in its six-team configuration. 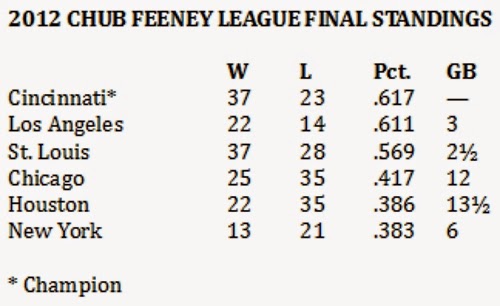 For the third straight season, the Cincinnati Reds won the Chub Feeney League. They will, in fact, go into the books as the only team to win the Chub Feeney under its six-team configuration.

The St. Louis Cardinals finished 2½ games behind the Reds. Both teams went to the NL playoffs that year, but they did not face each other, or the Cards would have had an opportunity to win the league under the wire.