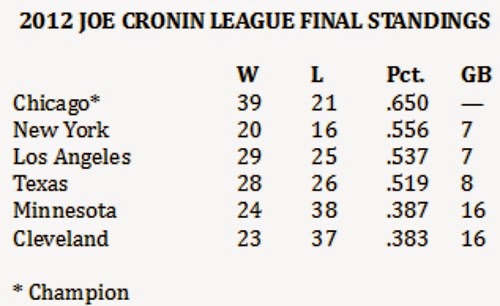 The Chicago White Sox finished in fourth place the first two years of the Joe Cronin League. And from looking at the American League standings in 2012, there's no reason to suspect the Sox should have done any better.

But the White Sox dominated the Joe Cronin League in 2012, winning almost a full two-thirds of their games to take the competition by a whopping seven games over the Angels and New York Yankees. As to their Major League performance, the White Sox finished a lackluster second place in the American League Central division at 85-77.

It just happened, as it sometimes does, that the Joe Cronin teams were the teams against whom the Sox prospered in 2012. They were 5-2 against the Yankees, 14-4 against the Twins and 6-3 against the Texas Rangers. The Sox were 6-12 against both the Detroit Tigers and the Kansas City Royals, but neither of those is a Joe Cronin team.