As former Commissioner Bud Selig said, at least once, "Controversy is good." And was there ever controversy at the top of the Second Division in 2012. The Texas Rangers and Atlanta Braves are going up in 2013, but the Los Angeles Angels had a complaint. 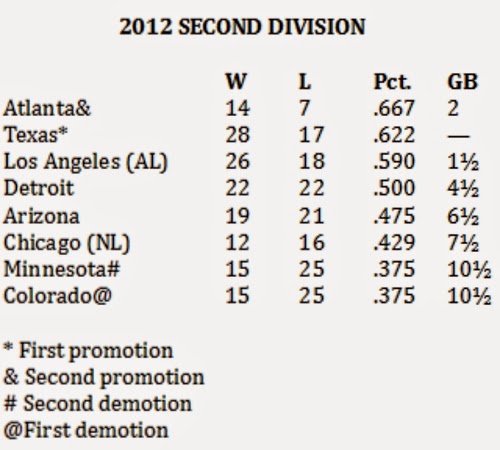 The Atlanta Braves and Texas Rangers each won the Second Division, in some sense, during the 2012 season. Both are going to the First Division in 2013.

The Braves (14-7, .667) had the best winning percentage, but the Rangers finished two games ahead of the Braves. By the rules, the Braves and Rangers are being promoted, but the Los Angeles Angels have a gripe. They finished 1 1/2 games behind the Rangers, but their winning percentage was .590. In a case with one team winning the division by percentage points and another winning it by games, those two teams are promoted.

However, as the Rangers won in the games behind column and thereby won the first promotion, Angels supporters point out that the Angels then should be the second team promoted, as they finished ahead of the Braves.

So, it was tough luck for the Angels.

On the bottom side, the Minnesota Twins and Colorado Rockies finished in a tie for last place, so those are the teams being demoted in 2013.  The Twins are being demoted for the second straight year. The Rockies, an original First Division team in 2010, were quickly demoted for finishing last that year, and their fortunes have not improved.