The Cleveland Indians won their first Bud Selig East title in 2013, taking advantage of an expanded field to beat out the Cincinnati Reds and the Tampa Bay Ray. The Indians had never before finished higher than fifth in the Bud Selig East. 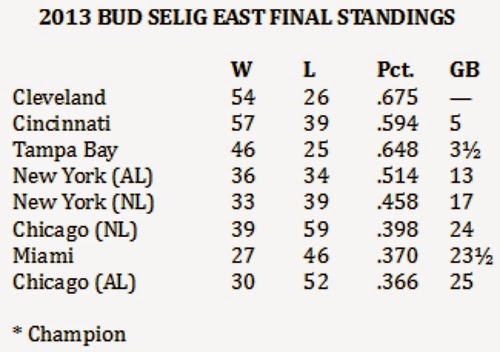 Just as the Cleveland Indians made a big move up in the Joe Cronin League, they also came a very long way in the Bud Selig East as the 2013 season developed.

In the first three years of the Bud Selig East, the Indians finished fifth twice and sixth once in a six-team circuit, never finishing within 13½ games of the lead. In 2013, though, the Indians dominated in every way, winning the league by 3½ games over the newly entered Tampa Bay Rays and five games over the Cincinnati Reds.

During the 2013 Major League season, the Indians finished 92-70 for the first wildcard. They ended up losing that wildcard game to the Rays.

The Indians' rise in the Bud Selig East and the Joe Cronin League somewhat is in step with their rise in the American League Central division. The difference is that the Detroit Tigers stood between the Indians and the AL Central title, whereas the Tigers are no part of the Joe Cronin or Bud Selig Leagues.