The Texas Rangers won the American League pennant in 2010 and 2011, but not until 2013 did they win the Bud Selig West. The Rangers won by percentage points over the St. Louis Cardinals. The Dodgers still could have beaten both the Rangers and the Cardinals if they could have won in the National League Championship Series. 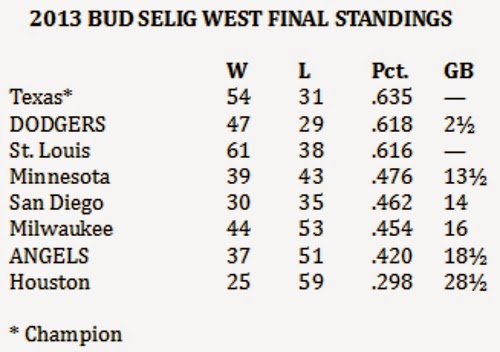 The Texas Rangers had nice three-year run though the American League, winning pennants in 2010 and 2011, then going to the playoffs in 2012. But in none of those years did the Rangers win anything in the Joe Cronin or Bud Selig Leagues.

The Rangers weren't bad in 2013, either, though they missed the playoffs because they lost a tie-breaker to the Tampa Bay Rays. However, they did win the Bud Selig West in a very close race. In the games behind column, the Rangers and Cardinals actually tied, but the Rangers, at 54-31 and a .635 winning percentage, finished percentage points ahead of the Cardinals, who were 61-38 and .616.