The final remaining team from the original Fourth Division, the Kansas City Royals, finally get to move up. But they are behind the Oakland Athletics, who won this tier with ease in 2013. 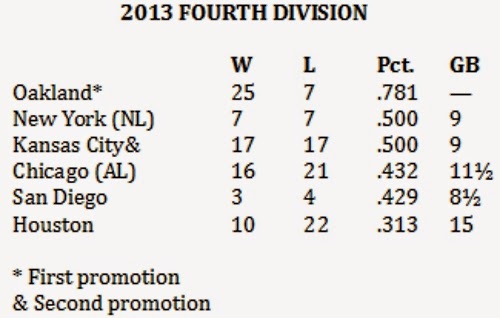 With the Houston Astros switching leagues and moving into the American League West in 2013, the Oakland Athletics had an easy whipping boy in the Fourth Division, and they took advantage.

The A's went 15-4 against the Astros on their way to a 25-7 trot through the Fourth Division to claim first place by nine games over the Kansas City Royals and the New York Mets. The A's are the only team with a winning record within this division.

As the Mets were only 7-7, thus lacking enough wins to advance, the Royals finally get to break into the Third Division. The Royals were 17-17.

Finally, the entire original Fourth Division from 2010 has turned over, though the Mets, one of that original group, has moved up and returned.