Despite falling from first place in the Joe Cronin League, the Cleveland Indians defended their championship in the Bud Selig East. The Indians won the 2014 Selig East title by three games over the New York Yankees and four over the Tampa Bay Rays. 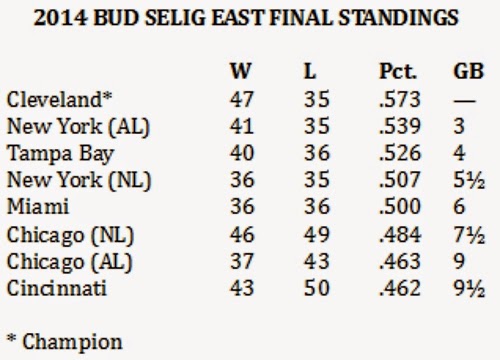 The Cleveland Indians finished their 2014 Major League season at 85-77, three games out of the American League playoffs. But the eastern crop of teams in the Joe Cronin and Chub Feeney Leagues was so weak that the Indians still won the Bud Selig East for the second consecutive season.

The Indians finished 47-35, three games ahead of the New York Yankees and four ahead of the Tampa Bay Rays. Another interesting contrast between how the Major League season plays out and what can happen in a league like this. As subtraction tells us, the Indians were 38-42 against clubs that aren't in the Cronin or Feeney Leagues.