The Angels survived a minor postseason scare and hung onto the First Division championship, taking the top-level title for the first time. They nosed out the St. Louis Cardinals. The Texas Rangers and Cincinnati Reds both battled injuries and did poorly in the 2014 First Division competition, earning demotion for 2015. 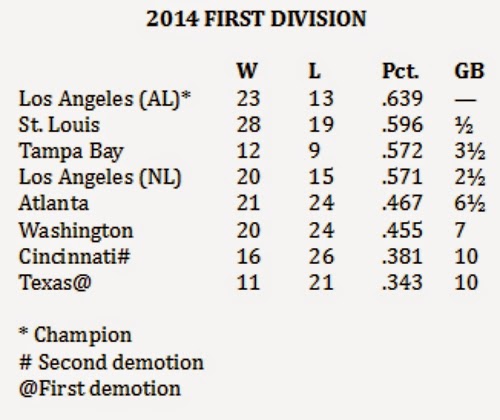 An interesting race took place for the First Division championship between the newly promoted Angels the top-level stalwart St. Louis Cardinals in 2014. The Angels won it, but by only one-half of a game.

If the Cardinals or Dodgers would have swept that series, then that team would have tied the Angels in the games column, though the Angels still would have and had the best winning percentage. As it happened, the Cardinals won the playoff series, 3-1, to finish one-half game behind the Angels, while the Dodgers fell to 2 1/2 games back.

The Angels became the third straight freshly promoted team in four years to win the First Division, and the second straight.

The Cincinnati Reds and Texas Rangers both endured injury-scathed campaigns and got themselves demoted for failing to hang with the First Division. The Rangers became the second consecutive team to win the First Division one year, then get demoted the next.