The Minnesota Twins and Colorado Rockies aren't for long staying in the Fourth Division. They finished one-two in the bottom tier in 2014, securing their advance back to the Third Division for 2015. The New York Mets, once again the second-place team, once again didn't win the 10 games they needed to advance. 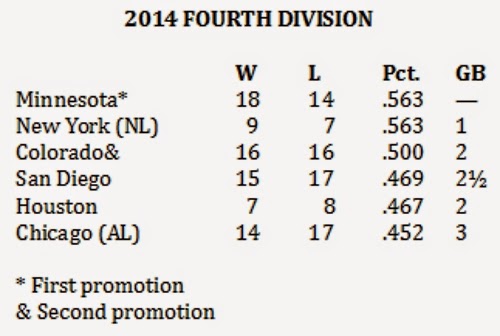 The Minnesota Twins and Colorado Rockies must be joined at the hip. At the least, they are joined in the last three years of these standings.

Now, they're both headed back up to the Third Division  for 2015. The Twins won the 2014 Fourth Division outright at 18-14. The Rockies actually finished third, behind the New York Mets. However, the Mets, again, didn't win enough of their few games to earn promotion. They finished 9-7 and would have advanced with one more win. But they didn't get it.

Once more, the Houston Astros and Chicago White Sox failed to advance, meaning the Astros will spend their fifth straight year in the Fourth Division, and the White Sox will be there for the fourth straight year.