The Toronto Blue Jays have won promotion for the second straight season, finishing with more wins than any other Second Division team in 2014. The Blue Jays will join the San Francisco Giants in promotion to the First Division in 2015, while the Boston Red Sox and Arizona Diamondbacks are going down. 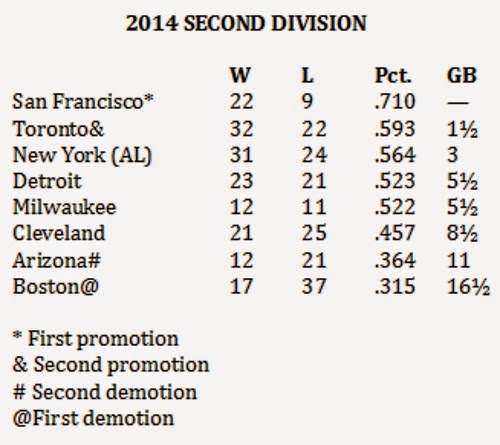 The Toronto Blue Jays, who were stuck in the Third Division for four years, suddenly are headed to the First Division after two consecutive years of promotion.

The Giants were solid throughout the year in Second Division games, finishing 22-9. The Blue Jays played a lot and won a lot, going 32-22 for second place. The New York Yankees made a strong bid for promotion back to the top tier, but finished 31-24, 1 1/2 games down to the Jays.