The Kansas City Royals needed a strong playoff run to secure their promotion to the Second Division for 2015, and they got it. The Baltimore Orioles, who lost four straight to the Royals in the American League Championship Series, got it the other way. 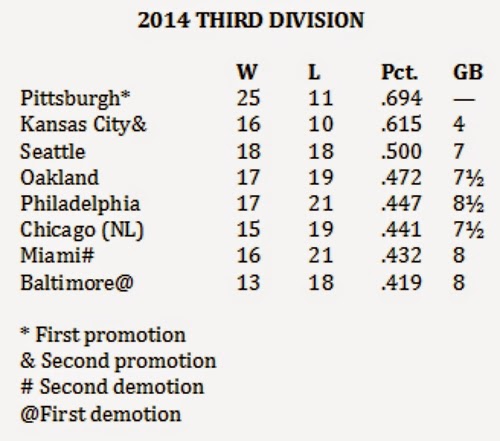 The Pittsburgh Pirates became a very good club in 2014, actually good enough to overcome a slow start and barrel into the Major League playoffs. Of course, we also saw what kind of club the Kansas City Royals became in 2014, advancing to the World Series.

Somewhat in parallel, the Pirates and Royals will advance to the Second Division in 2015 after finishing one-two in the 2014 Third Division. The Pirates won by an easy four games over the Royals, who finished three games ahead of their nearest threat, the 18-18 Seattle Mariners.

The Pirates finished 25-11 in the Third Division, and 20-6 of that came against the two teams that just dropped into the tier, the Chicago Cubs and Philadelphia Phillies. The Royals would have thrown second place wide open to the Mariners and Oakland Athletics if they had lost their wildcard playoff game to the A's, but they won that game and their next four against the Baltimore Orioles to solidify their position.

The Orioles, on the flip side, sealed their demotion by losing four straight to the Royals in the American League Championship Series. If the Orioles had won just two games in that series, they would have been saved. Instead, they are going down, along with the Miami Marlins.