The St. Louis Cardinals haven't started the 2015 season with the best run of title defenses in the history of the Dick Allen Award, but they came close. And the only other two times anyone did it better, it was the Cardinals. The Pittsburgh Pirates finally snagged the Allen from the Cardinals last weekend in Pittsburgh after heartbreak the weekend before in St. Louis. 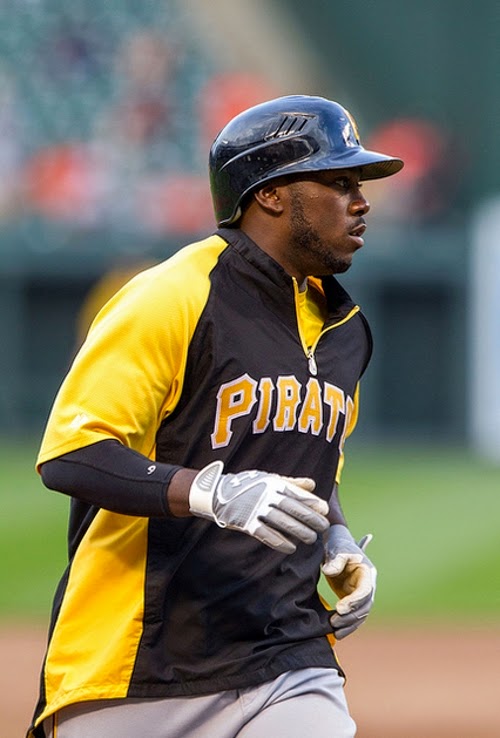 Josh Harrison was batting only .200 for the Pittsburgh Pirates through May 14, but his hitting helped the Pirates hold the Dick Allen Award from the Philadelphia Phillies this week (Keith Allison/Creative Commons Attribution-Share Alike 2.0 Generic license).

The St. Louis Cardinals finally lost the Dick Allen Award this week, giving it up to the club that probably deserved it more than any other.

The prize now belongs to the Pittsburgh Pirates, who dropped the Cards two of three last weekend in Pittsburgh. A weekend earlier, the Cardinals prevailed over the Pirates in three consecutive extra-inning, one-run games. That series was quite a scene shifter. One can imagine how different the season would look if these games that could have gone the other way had done so.

But it was just how it is when the Cardinals hold the Dick Allen Award, especially early in the season. Once the Cardinals barely wrestled the prize from the Chicago Cubs in an opening week split, they defended it eight consecutive times, holding it for 29 games. The 29-game reign is the longest within a single season for the Allen Award, but this competition has a history of the Cardinals bridging seasons with their dominance.

For example, the Cardinals won the Allen Sept 6-8, 2013 and held it all the way through the National League Championship Series (NLCS), a run of 27 games. They held it, then, into the 2014 season, first beating the Cincinnati Reds, 2-1, for a title defense before losing two-of-three at Pittsburgh. Thus, the Cardinals held the Allen for 33 games over two seasons.

Historically, the Cardinals now have held the Allen for 198 games since the competition began in 2011. Second on the list is the Atlanta Braves, who have held it for 69 games. All-time in games for the Allen, the Cardinals are 169-100, with 42 title defenses in 58 attempts.

The Pirates are defending the Allen this weekend in Chicago against the Chicago Cubs. 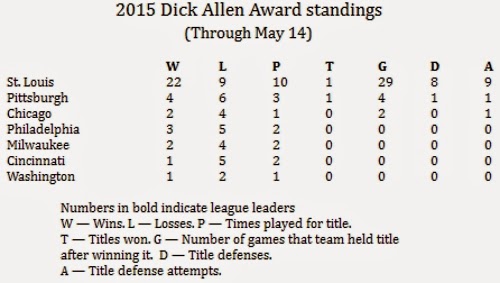