The first month of a new season reveals the same general run of results for the Dick Allen Award. The St. Louis Cardinals captured the prize during their first series of the season and they still have not let it go. 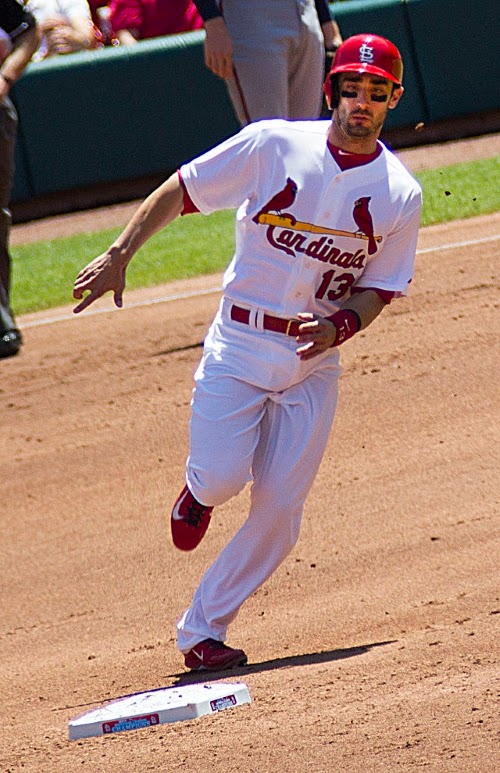 Matt Carpenter is batting .379 with a 1.085 OPS as the St. Louis Cardinals, once again, have established their dominance for the Dick Allen Award (Johnmaxmena2/Creative Commons Attribution-Share Alike 3.0 Unported license).

One of these seasons, perhaps, the St. Louis Cardinals won't all but own the Dick Allen Award. But that might not be this season.

We've been following this National League traveling prize, privately and otherwise, for five years now, and the Cardinals always hold it more than anyone else. It's got to be a measure of something. It does say this much: The Cardinals are one club that can win series after series after series. They've got a way of holding the Allen as if it had handles.

Look here, now. The Cardinals took the Aaron from the Chicago Cubs in a two-game split to begin the season, and they now have defended it six consecutive times. The most recent defense came this week, when the Cards won three of four against the Philadelphia Phillies in St. Louis.

The Cardinals have the best pitching anywhere right now, leading the National League with a 2.43 staff ERA. It might not last, but we'll see. The one starting pitcher who has proven he can do it all year in the NL, Adam Wainwright, now is expected to miss the remainder of this season after surgery on his left Achilles tendon.

There is no problem to this point with the St. Louis bullpen. While relievers across the NL are tossing a 3.52 ERA, St. Louis relievers are just a little more than half of that, 1.88, best mark in the league through April 28.

Cardinals closer Trevor Rosenthal still has control problems, walking four hitters in eight innings. But he has only allowed two hits, so his WHIP is an almost nothing 0.692.

The Cardinals also have some hitting going on, particularly outfielder Matt Holliday (.379 batting average, .985 OPS) and second baseman Matt Carpenter (.379, 1.085). Even with those performances, though, the Cardinals still were only eighth in the NL with 92 runs.

The Cardinals are putting the Allen on the line this weekend with three at home against the Pittsburgh Pirates.