The Dodgers and St. Louis Cardinals will see a lot of each other in the next 10 days in games that should matter a lot to the First Division. But the San Francisco Giants are off to such a good start in the top tier that there's a chance no one else will matter. 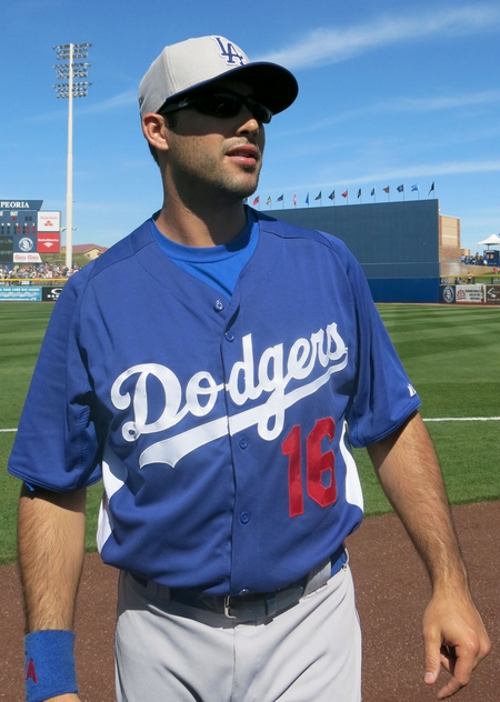 Andre Ethier is swinging a strong left-handed bat for the Dodgers, hitting .317 with a 165 OPS-plus. The Dodgers will need him for the next couple weekends against the St. Louis Cardinals (LiAnna Davis/Creative Commons Attribution-Share Alike 3.0 Unported license).

The Dodgers' greatest natural rival, of course, is the San Francisco Giants. But the team that really has stood in their way the last couple years is the St. Louis Cardinals.

The Cardinals have eliminated the Dodgers from the last two years of playoffs, offing them in a six-game National League Championship Series in 2013 and again in a four-game divisional series in 2014. In each of those seasons, though, the Dodgers won four of the seven regular-season meetings between those clubs.

The 2015 version of those games is coming right up – three in St. Louis this weekend and four at Dodger Stadium next weekend. All of these games should be thick with implications in this year's First Division competition, although the San Francisco Giants are threatening to make everyone else irrelevant.

The Giants are off to an 11-2 start in the top tier, winning seven of their nine meetings with the Dodgers and sweeping the Angels earlier in the season. Now, the Giants have added a team from outside Southern California to their hit list, beating the Atlanta Braves, 7-0, Thursday night in the first game of a weekend series in San Francisco.

The Dodgers slightly improved their First Division situation this week by winning two of three from the Braves at Dodger Stadium, but they're still only 4-8 in the division, 6½ games behind the Giants. The Cardinals have played only three games this year in the First Division, going 2-1.

Across the National League, the Cardinals are 31-16 and the Dodgers are 28-18, the two best records going. Both have been NL playoff semifinalists for the last two years.

The 2014 First Division season ended with the Dodgers and Cardinals meeting in the divisional playoffs. Either club could have captured the First Division with the right outcome in that series. But the Dodgers won just enough of those playoff games – one – to give the Angels a one-half game championship margin over St. Louis.

So, the Dodgers and Cardinals will meet seven times next 10 days with serious implications for the First Division.

Unless the Giants keep doing what they're doing.