Fourth Division: Mets might make it, Sox are sunk

The New York Mets are off to a good start in their bid to finally escape from the Fourth Division after two straight years of limited opportunity. The Chicago White Sox are all but certain to remain stuck in the bottom tier for another year, but they've blown three straight seasons of opportunity to escape. 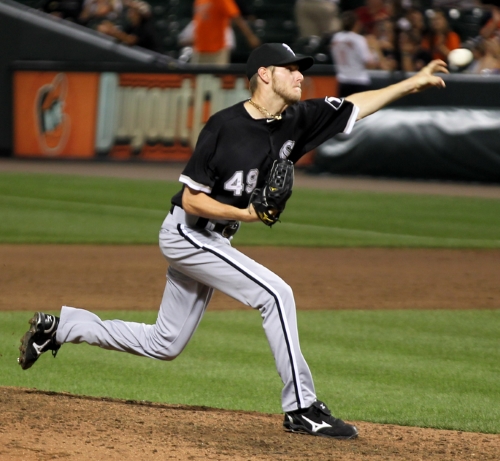 Chris Sale pitched the Chicago White Sox to a 3-2 win over the Baltimore Orioles Thursday, but the White Sox have almost no chance of escaping from the Fourth Division this year (Keith Allison/Creative Commons Attribution-Share Alike 2.0 Generic license).

The Fourth Division has been pretty slow going until this week, when it has picked up with a torrent of games involving five of the six clubs in this lowest echelon of ordinal competition.

The New York Mets, long overdue for a good shot at advancement to the Third Division, now hold first place in the fourth tier with a 7-2 record, and they play three at home this weekend against the floundering Miami Marlins. The Chicago White Sox, who have blown legitimate opportunities to escape from this cellar for three straight years, already appear to be trapped in the Fourth Division for another year.

The Major League schedule obviously isn't built to make sure all the teams in each division play each other, so the rules for promotion and relegation have to be rigged a little.

A light schedule in the Fourth Division will work against some club's chance of advancement, and that has been the plight of the Mets for the last two years. Last season, the Mets finished 9-7 in the Fourth Division, the exact same .563 winning percentage as the Minnesota Twins, who won the division at 18-14. The Mets certainly would have advanced, and won the division, with one more victory. As it was, they had to move over for the Colorado Rockies, who finished 16-16.