The Harmon Killebrew Award ran straight into the unrest in Baltimore this week, with the Orioles taking the prize from the Chicago White Sox in a one-game meeting in an empty Oriole Park at Camden Yards. The Orioles now will defend the Killebrew as the home team in St. Petersburg this weekend against the Tampa Bay Rays. 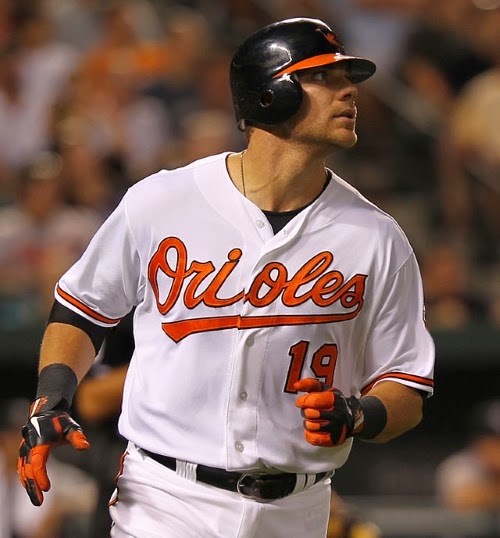 Chris Davis homered for the Baltimore Orioles in their meeting with the Chicago White Sox, shortened to one game in an empty stadium this week because of civil unrest stemming from alleged police brutality against a citizen (Keith Allison/Creative Commons Attribution-Share Alike 2.0 Generic license).

As it happened, the game played in an empty Camden Yards Wednesday between the Chicago White Sox and Baltimore Orioles had the Harmon Killebrew Award on the line. The White Sox had taken the Killebrew from the Kansas City Royals by marking two wins against them Sunday in Chicago.

Of course, riots broke out in Baltimore last weekend, the latest flare-up between interests so readily named as Blacks and police, but which is really about policy makers and Americans not asking the right questions about a swath of people made disposable by a global information economy.

No one has put it better than Orioles Chief Operating Officer John Angelos in a series of tweets:

"(M)y greater source of personal concern, outrage and sympathy beyond this particular case is focused neither upon one night’s property damage nor upon the acts, but is focused rather upon the past four-decade period during which an American political elite have shipped middle class and working class jobs away from Baltimore and cities and towns around the U.S. to third-world dictatorships like China and others, plunged tens of millions of good, hard-working Americans into economic devastation, and then followed that action around the nation by diminishing every American’s civil rights protections in order to control an unfairly impoverished population living under an ever-declining standard of living and suffering at the butt end of an ever-more militarized and aggressive surveillance state.

"The innocent working families of all backgrounds whose lives and dreams have been cut short by excessive violence, surveillance, and other abuses of the Bill of Rights by government pay the true price, and ultimate price, and one that far exceeds the importance of any kids’ game played tonight, or ever, at Camden Yards. We need to keep in mind people are suffering and dying around the U.S., and while we are thankful no one was injured at Camden Yards, there is a far bigger picture for poor Americans in Baltimore and everywhere who don’t have jobs and are losing economic civil and legal rights, and this makes inconvenience at a ballgame irrelevant in light of the needless suffering government is inflicting upon ordinary Americans."

Friday, the Maryland State's Attorney General for Baltimore brought charges against six police officers, including one charged with murder, stemming from the death of Freddie Gray last weekend. All six officers were charged with assault and four were charged with involuntary manslaughter.

Under the circumstances, something as trivial as the Killebrew made barely a ripple. However, the Orioles hit as if their empty stadium were the setting for batting practice. They scored six times in the first inning, keyed by a three-run homer by Chris Davis against White Sox starter Jeff Samardzija.

The Orioles won the game, 8-2, and now take the prize to St. Petersburg, as it was decided that riot-torn Baltimore isn't a suitable place for baseball at the moment. The Orioles will play as the home team in three this weekend against the Tampa Bay Rays.