The Henry Aaron Award is in the hands of the Dodgers, who took it from the San Diego Padres on the road last weekend and have held it since. The Padres had taken it from the San Francisco Giants, ending a long run with the prize for the World Champions. 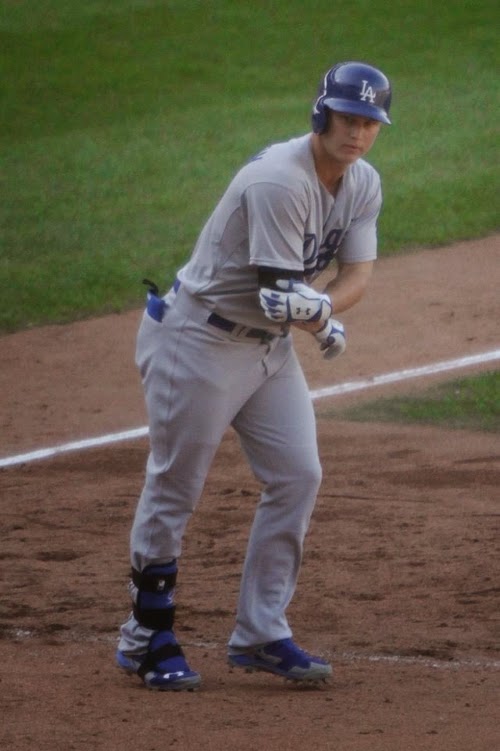 Joc Pederson had a .938 slugging percentage (three homers, a double and a single) in 16 at-bats from April 24 through May 1 (TonyTheTiger/Creative Commons Attribution-Share Alike 4.0 International license).

The Dodgers have defended the Henry Aaron Award by winning two of three from the San Francisco Giants this week at Dodger Stadium.

A 7-3 rubber game win over the Giants on April 29 clinched it for the Dodgers, who hit four home runs against right-hander Ryan Vogelsong, all from the left-handed batters box. Joc Pederson, Adrian Gonzalez, Andre Ethier and Jimmy Rollins all went long.

A night earlier, in an anticipated meeting between ace left-handers Clayton Kershaw of the Dodgers and Madison Bumgarner of the Giants, the Dodgers sat all of their left-handed hitting and turned in a tepid offensive performance in a 2-1 loss. The Dodgers had won the series opener, 8-5.

That came after the Dodgers won the Aaron by taking two of three on the road from the San Diego Padres.

The Dodgers denied another moment with the Aaron to the Giants, who took it  from the Padres during the final regular season series of 2014, then held it all the way through the World Series. The Giants maintained it through their first series of 2015, winning two of three from the Arizona Diamondbacks.

Then, the Giants met the Padres again for the second series of the new season. After the Giants won the opener, 1-0 (on April 9), the Padres beat them three straight to recapture the Aaron. And the Padres kept it through more than two weeks of remarkably efficient offense.

With their celebrated new lineup, the Padres held the Aaron for three defenses to take the early lead in the standings. They didn't lose it until the Dodgers beat them on April 25 in San Diego to clinch a series victory with an 11-8 victory. In that game, Ethier, Gonzalez, Howie Kendrick and Juan Uribe all homered for the Dodgers.

Through April 27, the Padres were the league's best-hitting team with two outs and runners in scoring position, carding a .318 batting average. No other NL team was batting higher than .269. The Padres drove in 30 runs (and scored 30) in their 95 place appearances on that split.