The Dodgers are making an impressive run with the Henry Aaron Award, defending it five straight times entering this weekend's series against the Colorado Rockies at Dodger Stadium. The Dodgers now lead all clubs with 13 Aaron game victories and 15 games defending the championship. 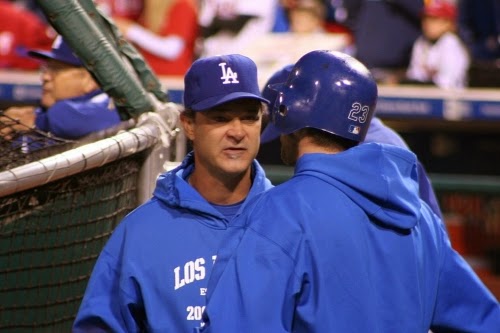 Dodgers manager Don Mattingly is leading his club to its best run of games ever with the Henry Aaron Award (pvsbond/Creative Commons Attribution-Share Alike 2.0 Generic license).

The Dodgers were never particularly been a player in the Henry Aaron Award before 2015.

So, the Dodgers are making history for themselves in 2015 with their present run of five straight title defenses entering this weekend's series against the Colorado Rockies at Dodger Stadium. The Dodgers have established themselves as the team on top of the Aaron so far this year, 13-5 with 15 games of title defense entering the weekend.

The path hasn't exactly been challenging for the Dodgers in the last couple of weeks, which have included series against division cellar dwellers Colorado and the Milwaukee Brewers. But the Dodgers are beating those teams they have to beat and, when they don't beat them, they almost do. From the time the Dodgers won the Aaron from the San Diego Padres April 26-28 through May 14, the Dodgers lost five games, four of those by one run.

Against the Rockies, the Dodgers are going for their sixth straight Aaron title defense, which would tie the all-time record. The St. Louis Cardinals, who won the Aaron from the Texas Rangers in the 2011 World Series, defended it in their first attempts of the 2012 season, a total of six times.

In 2013, the Boston Red Sox won the Aaron by beating the Dodgers two-of-three at Dodger Stadium Aug. 23-25. The Red Sox then defended the title six straight times before losing it to the Baltimore Orioles two-of-three Sept. 17-19 in Baltimore. The Red Sox went all the way to win the World Series, but they didn't have the Aaron with them and the award retired with the regular season for the only time in its history. 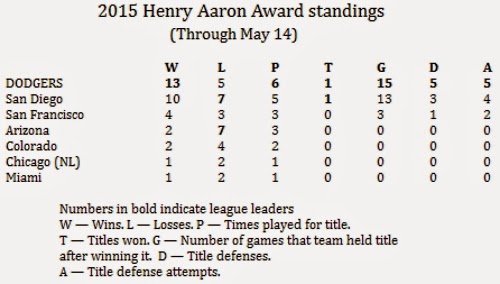