With Giancarlo Stanton having his best year and Dee Gordon adding juice to the top of their lineup, the Miami Marlins are much improved offensively. They are defending their first Dick Allen Award in two years this weekend against the Cincinnati Reds. 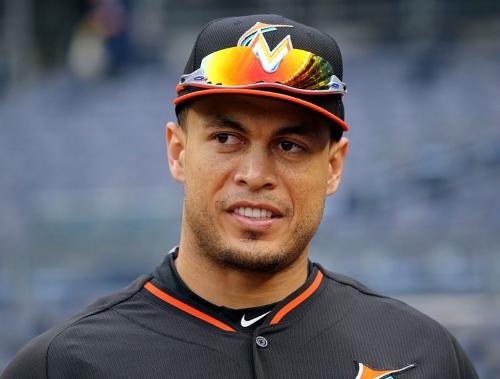 Giancarlo Stanton has 10 homers in June, approaching his own Miami Marlins records for most home runs in a month (Arturo Pardavila III/Creative Commons Attribution Generic 2.0 license).

The Miami Marlins are defending the Dick Allen title for the first time in two years this weekend, which makes this a worthwhile time to look at two players on that club who really are ripping it up.

The Marlins took the Allen by winning three of four at home against the Colorado Rockies June 11-14 before going into four interleague games against the New York Yankees. The Marlins picked up their National League schedule this weekend in Cincinnati, where they were 35-55 all-time against the Cincinnati Reds.

The Reds won the opener Friday night, 5-0, marking the 11th straight time the Reds held Miami to four runs or fewer going back to May 14, 2013, about a month before the Marlins last won the Allen. The Marlins returned the favor Saturday with a 5-0 win against the Reds behind seven shutout innings by Justin Nicolino, who allowed only four hits in his Major League debut.

So, the Marlins and Reds will meet Sunday for the Dick Allen. The Reds are taking their third crack this year at the Allen, but they have yet to win it and they are 2-6 this season in Allen games.

After giving the impression of being a team on the rise last season, the Marlins are only 30-40 overall this season playing in the weak National League East. The problem is not their offense.

In 2013, the Marlins ranked last in the National League with only 39 games in which they scored five or more runs. Last year, they improved to 56 such games, raising their ranking to ninth in the NL. This year, they have reached five or more runs in 28 games, which ties them for fifth with the Arizona Diamondbacks.

Their best hitter is Giancarlo Stanton, who is one of the best hitters anywhere. Stanton leads the Major Leagues with 25 homers, reaching that mark in only 67 games. Stanton became the fourth player in the last 10 years to reach 25 homers that fast, behind Albert Pujols (who did it in 49 games in 2006), Alex Rodriguez (63 in 2007) and Jose Abreu (67 in 2014).

Then, there's Dee Gordon, who went to Miami from the Dodgers in a batch of trades that ended with the Dodgers getting Howie Kendrick from the Angels to play second base. A lot of people around the Dodgers like Kendrick at second base, but it's hard to say they're better off without Gordon.

Friday night, Gordon reached 100 hits this season in his 65th game, becoming only the sixth player in the National League since 1961 to get there that quickly. The fastest was another speed merchant, Ralph Garr, who reached 100 hits for the Atlanta Braves in his first 62 games of the 1974 season. Gordon entered this weekend's series on a pace to have 131 hits at the All-Star break, averaging 1.5 hits per game. He had one hit in each of the first two games of the Cincinnati series.

The Marlin last won the Allen June 20-23, 2013, on the road, taking three of four from the San Francisco Giants. The Marlins defended the prize twice before losing three straight on the road to the St. Louis Cardinals July 5-7 that year. Historically, the Marlins are 24-24 in games for the Allen, winning the prize three times and defending it in three of five attempts. This weekend's series is their 15th series for the prize all time.

Between their last successful title defense and this year's Allen victory against the Rockies, the Marlins were 4-12 in Allen games, failing four attempts to win it.

All-time in the Allen games, the Reds are 53-53. This weekend's series is their 36th for the Allen. They have won nine titles since the prize began during the 2011 season.