The Angels and Dodgers both are in First Division trouble coming through the first week of June. Both are at the bottom of the division, which spells relegation to the Second Division for 2016 if they don't rise in the top tier. That means beating top-level clubs, which neither Los Angeles club has done very much of this season. 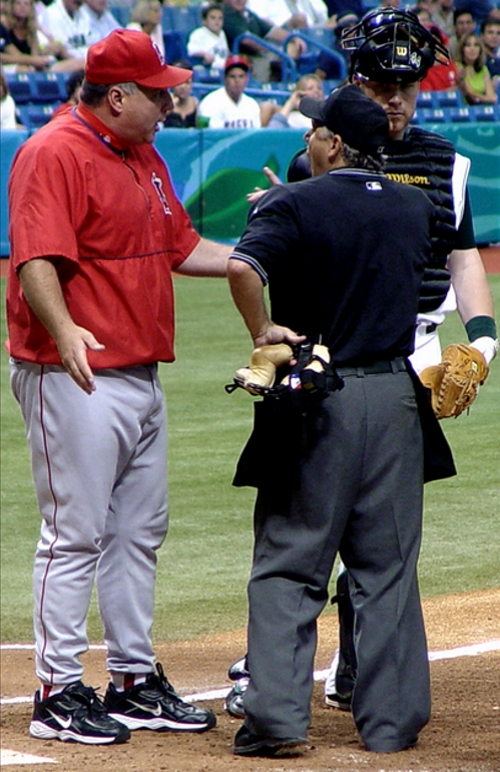 Angels manager Mike Scioscia won't be able to argue his way into remaining in the First Division for 2016 if his club doesn't improve its performance against this top tier of teams (Googie man/Creative Commons Attribution-Share Alike 3.0 Unported license).

The First Division is heating up with a lot of action during these last couple of weeks, but the Dodgers and Angels aren't heating it up with it.

The Angels lost two of three last week at home against the Tampa Bay Rays, dropping the first two games after winning the opener. The Dodgers have not succeeded in purchasing the goods to take down the two elite clubs in the National League, the St. Louis Cardinals and San Francisco Giants, posting a combined 4-11 against the two clubs that have accounted for the last five National League pennants.

The Angels need to get their getting quickly, as they'll play fewer than two dozen games, total, in the First Division. At 3-7 in the First Division, the Angels are defending their 2014 top tier title with a last-place performance, six games behind the front-running Giants. The Angels will get another crack at the Rays next weekend in St. Petersburg. After that, though, the pickings will be slim.

Following next weekend's series at Tampa Bay, the Angels will have only nine games left in the First Division this season – six against the Dodgers and three against the Toronto Blue Jays. Being six games down in the First Division is a lot different from being down 5½ to the Houston Astros in the American League West, which is another position they've taken. The Angels have a lot more time in the AL West, and the Astros (12-10 against clubs at or above .500 and 22-13 against clubs below .500) are likely to cool off as they play against better clubs.

Teams have won ordinal divisions with fewer than two dozen games, but it requires a superior winning percentage for that team, and there can't be another team that's both playing a lot of games and winning a big share of them. The record for fewest wins to take a division belongs to the Texas Rangers, who won the First Division in 2013 with a 13-8 record in their 21 games. The second place team, Tampa Bay, finished 18-15.

However, the Rangers were swiftly demoted to the Second Division after an injury-plagued 2014 season. That does not appear to be a danger for the Giants.

The Giants lead the First Division with an impressive mark of 12-4, thanks largely to their combined 10-2 performance against the Dodgers and Angels. The Rays are pressing the closest pursuit, only a game down at 9-3 after taking two of three in Anaheim last week. The Nationals (7-5) and the Cardinals (6-3) are the only other clubs breaking even in the division.

As the schedule lays out, the Giants will play about 40 games this year in the First Division, so their work is far from done. Same with the Dodgers. But the Dodgers are on the other end of the standings from the Giants. While the Giants vie for the leadership and the championship, the Dodgers now hold seventh place, which will get them relegated to the Second Division in 2016 if they do not improve their performance against this top tier of clubs.